The sound of cheers will return to Goldington Road as Bedford Blues play their first match at the ground in 118 days tonight.

Well, that’s the plan anyway, but nearby rivals won’t let that happen easily, even if this game is badged as a pre-season friendly.

Having recruited heavily following last season’s mid-table finish in a very competitive National League One, ‘the blood and the sand’ will present a stiff challenge.

New Head Coach, Richie Williams has pulled a strong squad together, with plenty of Championship experience, as well as former Blues, including Forwards Coach Dan Richmond.

“Cambridge have recruited well this summer and they are sure to give us a stern test on Friday night,” said Blues’ director of Rugby Mike Rayer.

“With only two pre-season friendlies, this game is massive in terms of our preparations and that is why we’ve pretty much thrown all our new signings in from the start.”

But our local lads are raring to go and the Bedford Coaching staff have gathered a squad with an array of new faces looking to prove their worth.

They include new centre Oskar Hirskyj-Douglas who has now joined the Blues officially following a successful summer trial.

Having played for Wasps, Henley, Chinnor, Loughborough Students and England Sevens, Oskar is a great addition to the squad.

Other new signings, Charlie Reed, Sam Leeming, Joe Atkinson, Dan Temm, Robbie Smith and Joe Wrafter all make their debuts from the start while Grayson Hart is named in the replacements. 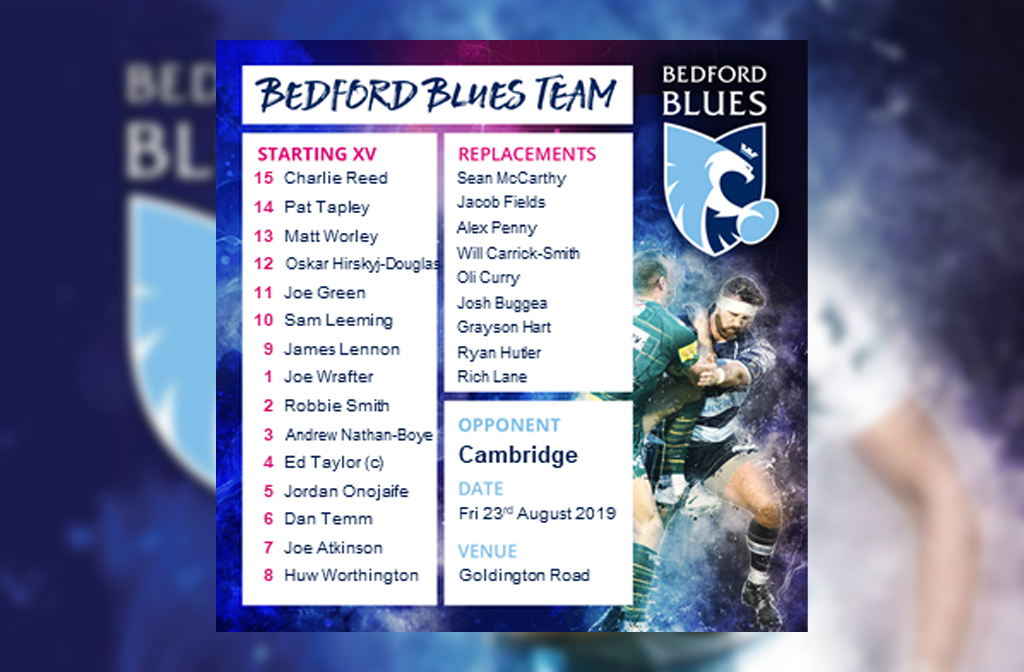 Speaking of giving the newbies their first outing, Mike Rayer added: “We are really looking forward to the game… it will be great to see all the new lads have their first hit out.

“We are excited by what we’ve seen so far and now comes the chance to put all the hard work into action.

“It should be a great evening of rugby.”

The weather is looking good for tonight’s game so get down to Goldington Road, kick-off is at 7:45pm. Online discount tickets available online until 2pm today.

After that tickets can be purchased on the gate.