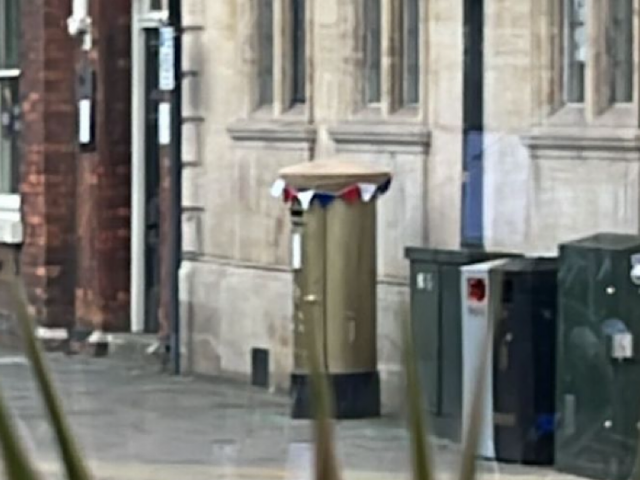 A crocheted gold postbox topper, made to commemorate the Queen’s Jubilee, has been stolen from St Paul’s Square.

It comes just two weeks after the ‘platinum’ version was stolen from the post box on the High Street.

Steph Goldsmith had spent several weeks creating the intricate crown designs to sit on top of two of the town centre postboxes.

They were created to raise funds for the FACES and Ronald McDonald House charities.

Following the theft of the first crown, Steph channelled her disappointment into making a replacement. However, now the second crown has been stolen, she’s told the Bedford Independent that she’ll remove what’s been left behind so it doesn’t get damaged further.

“Just again, disappointed someone has to ruin the fun,” said Steph.

”But all the love and positive feedback from everyone makes up for the couple of sneaky thieves.”

Steph said she was planning to donate the gold crown to The Higgins Bedford following the Jubilee celebrations so the public could enjoy it for a bit longer in the safety of the museum.

And although the thefts have left her disappointed – particularly for the charities she was raising money for – they’ve not dampened her enthusiasm for creating more street art.

“I would love to do more toppers in the future but we’ll see.”

Staff at Bridges Espresso Bar raised the alarm on Friday morning, after noticing the gold crown was no longer in pride of place on the post box.

”We were so upset to see that the crochet Crown Jewels have gone missing,” said owner, Beckie Fry.

“The whole team have been keeping a close eye on them since they were placed there.

“On Thursday we could see so many families stopping to admire and have a photo alongside them. They were still in place when we left Bridges on Thursday evening and we noticed this morning they were sadly no longer there.”

Steph will be removing what remains of the toppers over the weekend.

You can still donate to the charities at the following links: FACES and Ronald McDonald House.