An intricately crocheted Jubilee crown and cushion – made to raise money for a local charity – has been stolen from its town centre location.

Steph Goldsmith, who made the crocheted postbox topper, said she was  ‘absolutely gutted’ that it had been vandalised just 24 hours after it was installed.

Steph – who taught herself to crochet five years ago during long stints in hospital to visit her newborn son in intensive care – began work on the silver and gold crowns and pillows in April.

She created the toppers to celebrate the Queen’s Platinum Jubilee and to raise money for two charities close to her heart, FACES Bedford and Ronald McDonald House.

The toppers were installed on Sunday (22 May) on a postbox outside Rymans on the High Street and on the golden post box in St Paul’s Square.

This morning (Monday), the silver crown and pillow had been removed from High Street postbox and it is believed that they have been stolen. 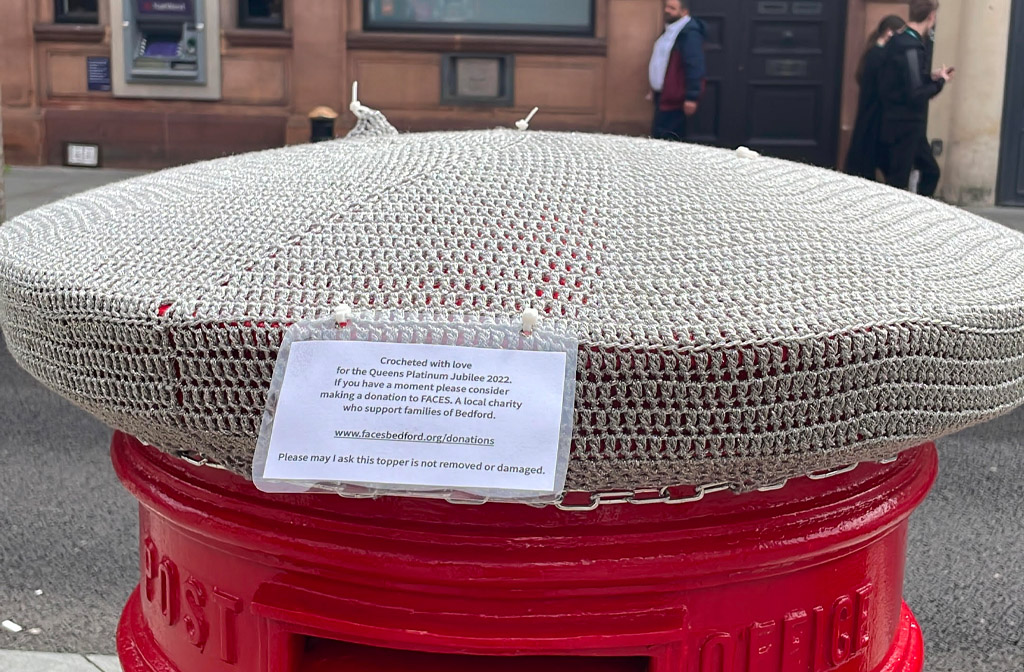 “It’s a bit gutting,” Steph told the Bedford Independent. “I thought that by putting it on a post box in a busy location, it would be alright, but it barely lasted 24 hours.

“I don’t think I’ve got time – or the energy – to make a replacement before the Jubilee celebrations.”

Steph is now in two minds about leaving the gold crown and cushion in its St Paul’s Square location.

“It doesn’t feel like there’s much point,” she said.

A spokesperson from FACES Bedford, one of the charities benefitting from the installation said: “We are devastated to learn that Steph’s Queen’s Jubilee post box topper has been removed from the post box in Bedford town centre.

“Steph spent a lot of time making these beautiful pieces for our community to enjoy and to raise vital funds for charities that support children and their families. We hope that they are returned for all to be enjoyed as soon as possible”.

You can still donate to FACES charity here.