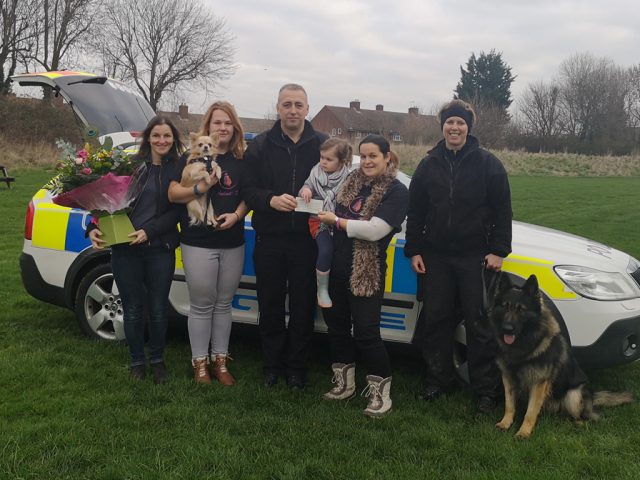 Police Dogs from the Bedfordshire, Cambridgeshire and Hertfordshire (BCH) Dog Unit have raised £3,000 for two animal charities thanks to sales of their calendars which features photos of the crime-fighting pooches.

The calendar was advertised in publications, including the Bedford Independent, and on the Dog Unit’s Facebook and Twitter pages, so they could raise as much money for charity as possible.

The cash has now been split between Luna Animal Rescue and German Shepherd Rescue Elite.

PC Lindsey Cox, who organised the calendar and who is a handler with Police Dog Harley, said: “I could have never imagined the success and generosity we’ve had and I would like to say a massive thank you to everyone who supported us.

“I am so grateful to the public for getting behind us and making our fundraising a success.”

On Monday, PC Cox met with Natalie Howe from Luna Animal Rescue, who are entirely funded by donations, to hand over their share of the money raised, Natalie added: “We are so pleased to work alongside the BCH Dog Unit and are hugely grateful for their excellent fundraising to help us.”

Meanwhile, Allison Clarke from GSRE said: “As a charity who operate solely on public donations, we were very pleased to be asked to be part of this brilliant fundraiser…

“As a breed-specific charity for German Shepherds, we know the loyalty these dogs give to us even when they have not had the best lives in the past.

“People could learn a lot from these fabulous dogs and knowing that dogs like them are out fighting crime on our behalf everyday makes us feel very proud and safe.”

A number of the dogs, including puppy Obi and police dogs Dexter, Billy and Harley, were photographed by Bedfordshire-based Katrina Wilson Dog Photography, who produced the calendar.