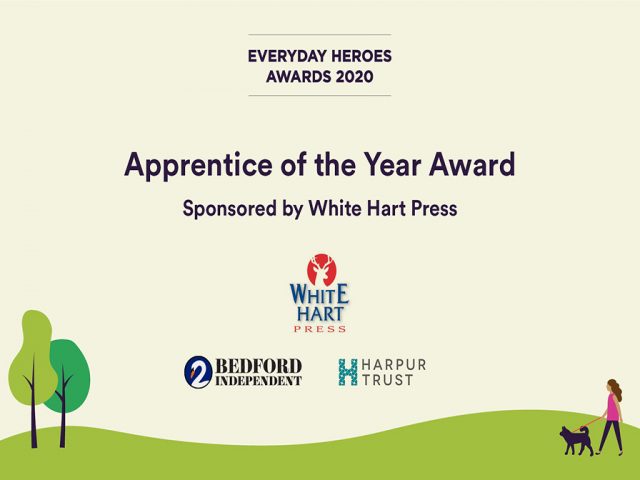 Today we’re shining a spotlight on Bedford Borough’s apprentices and giving you a short insight into why they’ve been nominated.

Hayward Lane Hair and Beauty have proudly nominated their ‘golden girl’ apprentice Chloe. They describe her as an incredible youngster who is able to combine her enthusiasm for the hair and beauty business with a great sense of fun, charm and love and respect for their clients clients. “We would definitely struggle without Chloe in our lives.”

Ellie has been described as a real asset to her company who never loses her cool when dealing with difficult situations and takes everything in her stride. “No one has a bad word to say about Ellie,” said her nominator. Understandably anxious when she first started, Elle recently thrived at an event with over 60 attendees, chatting to complete strangers including the local MP.

“Proactive was a word invented for Holly,” said the staff at Mark Rutherford School who nominated her. She approaches her role with determination to succeed and to put her school on the STEM map. Holly went from being a pupil at the school to their STEM assistant. “Holly’s journey leading up to this appointment highlights the successful output of identifying a skills gap, making the most of the educational opportunities presented and filling a highly skilled employment gap,” said her testimonial

“There is always an aura of laughter and fun around Sonne which really lifts some of the vulnerable people we serve in our communities,” said YMCA Bedfordshire. “Sonne is the personification of our YMCA Bedfordshire values and behaviours and is a credit to the Maintenance Team.” His line manager has said he sets a great example for others to follow and a huge asset to their team.

After just a few months at About the Job, apprentice Sophie took on responsibility for generating sales and over-achieved her target by an incredible 238%. Her manager has said that Sophie has added value to the business and is “the best member of staff that I’ve ever employed.” Sophie has now been taken on as a full-time member of staff and is team leader and role-model for new apprentices coming into the business.

Suraiya is an apprentice at Janssens Pharmacy and has become a much-valued member of the team. Many customers have given feedback about her calm and polite manner, leading her to take on more responsibility. Suraiya’s nominator said, “I believe she has the ambition and ability to take on pharmacy managerial responsibilities in the future.”

Having studied sports science at college, accountancy wasn’t something Toni had considered. However, her nominator has described her as having a natural talent to digest information, complete tasks accurately and efficiently. “Our work requires diligence and she has a natural talent to deliver,” said her testimonial. “For someone who wasn’t sure on their career path, who didn’t know they could become an accountant, Toni has become a role model as a trainee in the business and for ACCA.”

You can find out who has been awarded the Bedford Independent Everyday Heroes – Apprentice of the Year Award on 25 March 2021 at 7:30 pm on our website, Facebook Page and YouTube channel.