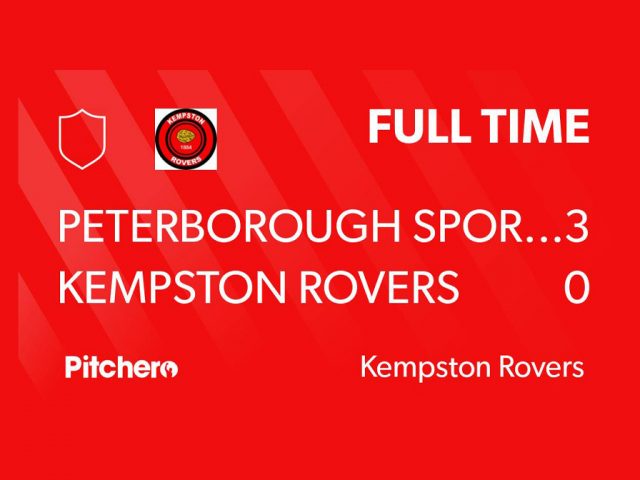 The Turbines came out on top on this blustery day, thanks to three goals from set pieces – two of which were heavily wind assisted.

In the first half, Rovers were playing into the wind and it was the hosts that took full advantage and could’ve been ahead in the eighth minute when a Sembie Feris effort was parried into the path of Mark Jones, but the Sports’ leading marksman’s follow up effort was weak and allowed James Martin to recover.

Sports did take the lead on ten minutes, a deep free kick was swung in, catching the wind to travel through to the back post. Jones nodded it back across goal, where the unfortunate Jordan Wright couldn’t get himself out of the way in time and saw the ball divert into his own net.

Five minutes later and it could’ve been two nil, Lewis Hilliard going for goal from a free kick where everyone expected the cross.

The ball flying low, just outside the near post. Rovers first attack of note came from down the right hand side, a Daniel Akubuine cross found Izale McLeod having been missed by Moat in the home goal, but the play was stopped as the veteran front man was judged to have handled the ball in bringing it down.

With twenty minutes gone, Sports managed to double their lead, a corner from the left was helped into the far post area by the strong winds, where it was gleefully met by the head of Mark Jones. Rovers best move of the half came on the half hour mark.

A surging run from Nathan Tshikuna down the left saw him release McLeod, who left the Sports’ skipper Richard Jones on the seat of his pants as he danced his way into the box.

McLeod then squared the ball across to the waiting Scott Joseph, but he couldn’t make forceful enough contact on the ball and the Peterborough defence managed to get back and clear the danger.

Ten minutes before the break came a moment of controversy; Mark Jones lunged in on Ben Shepherd with a reckless challenge and then proceeded to shout in the face of the prone Rovers midfielder.

Jones proceeded to have a raised voice and a wagging finger at the referee, who allowed him to escape with just a talking to. Both sides had half chances as the half came to a close, but neither genuinely troubled the score sheet. Two nil it remained at the break.

The second half was less than ten minutes old when Rovers’ skipper for the day Jordan Wright found himself in the referee’s notebook.

He went in for a firm challenge on an opponent and won the ball, but the play was deemed reckless by the official and the card was produced.

Just after the hour, Moat was on hand to deny Kempston in unorthodox fashion, a long throw in the wind saw Scott Joseph attempt to toe end the ball into the net, but Moat stuck out a palm and blocked the shot at close range.

With sixty six minutes on the clock, Sports made it three. A corner from the left found Mark Jones at the back post, his initial header was well saved by the acrobatics of James Martin, but Dion Sembie Feris was on hand in the six yard box to poach the goal on the follow up.

The moment of the match and possibly the season almost came off with ten minutes to go.

Rovers sub Josh Crawley sized up a very long shot from just inside the Sports half of the pitch, using the strong wind to his advantage, the ball beat Moat in the goal all ends up but agonisingly for Crawley and Kempston, came crashing back off the crossbar.

Late on, Kye Andrews found himself as the second name in the referee’s book for a clumsy foul. Three nil the final score.

Victory keeps Sports at the top of the table, with their games in hand still to play.

Rovers remain in fifteenth after the days other results, but with both Kidlington and North Leigh winning, the gap over the bottom two is cut to six points.

Next up for Kempston is the short trip up the A421 to visit Bedford Town.

Letters: Heartfelt thanks to all the volunteers helping at Covid vaccination...

Letters: Whatever your views, make sure you respond to East West...