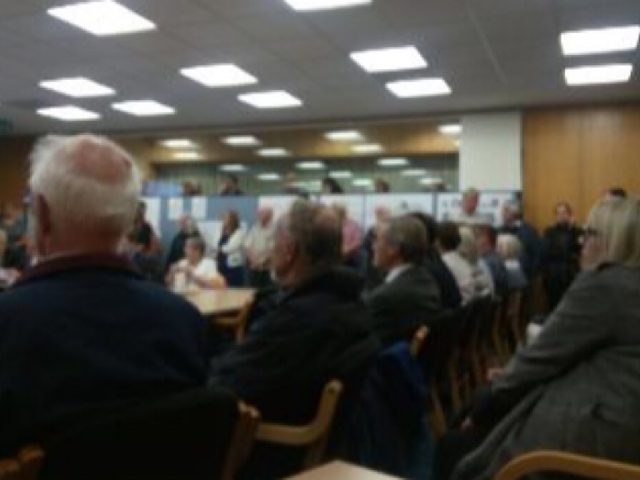 That was the cry from Willington residents who turned out in force to object to a plan for new housing on farmland.

Councillors at Bedford Borough Council’s Planning Committee decided to put off a decision on the proposal by Kodiak Land to build up to 46 homes behind Grange Way to allow them to visit the site first.

“There is grave concern over the rural character of Willington,” said Frazer Hickling, from Phillips Planning who spoke on behalf of objectors at Monday’s meeting. There was standing room only in Committee Room 1 at Borough Hall as the issues were calmly debated.

He said that a report from council officers was “finely balanced” and argued that their recommendation to give the proposal the green light could be made the other way because of harm to the area.

The council has been judged by the Government not to have a five year supply of land for housing. Officers explained that housing proposals have to be “tilted” in favour of developers unless there were overwhelming reasons to turn them down.

Willington Parish Councillor Alan Bertram said the council had been working since 2016 on their own neighbourhood plan. They have identified their own sites and the site off Grange Way was not on their list.

He claimed that the proposal would be at three times the housing density of the village.

“It would undermine the plan-making process. I urge you to refuse permission,” he said.

But planning officers said that because the local neighbourhood plan had not been put to residents in a referendum, or tested by the council, it could only be given limited “weight” in the decision making process.

Tim Poupard, speaking on behalf of Kodiak Land, said the new family homes were needed because there are “nearly 1,000 families on the council’s waiting list for housing.”

The company was also offering to pay for road improvements and had been supported in this by the local school. The land proposed for building on was also not prime agricultural land but a “horse paddock.”

“It hasn’t been used for agriculture for a long time,” he said.

Ward Cllr Stephen Moon (Cons, Great Barford) said the lack of a housing supply was no reason to give “carte blanche for developers to do what they like” or for “poor planning.”

Councillors debated whether the plan would have a high visual impact on the village. Their officers believed the impact would be limited but Cllr Alison Foster (Cons, Harrold) said: “I am still of the view that there is a visual impact.”