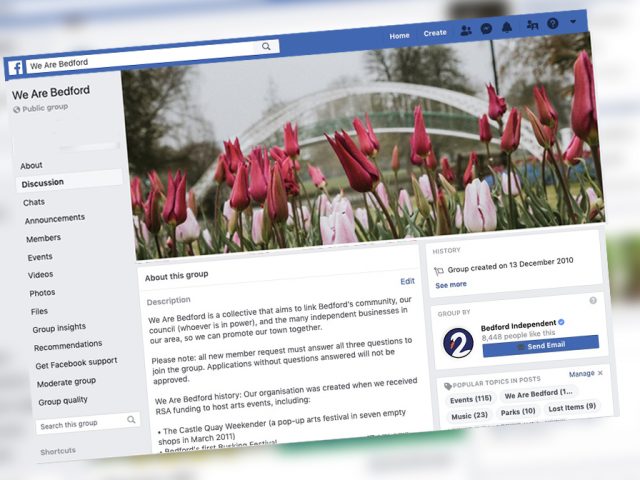 The We Are Bedford facebook group has reached a significant milestone today, welcoming its 17,000th member.

Created as part of the We Are Bedford Castle Quay Weekender event in 2010, that helped encourage new businesses into the then new Castle Lane development, the group has continued to help Bedfordians share the best things about their town and to encourage positive participation in the local community.

Today it has evolved into the largest Facebook group dedicated to all things Bedford, helping people to find out what’s happening in their home town, share fabulous photos, learn about community projects and groups, get recommendations for businesses and make new friends.

The group has also been instrumental in highlighting the passionate community spirit in Bedford, helping to encourage others to also create their own events, campaigns and groups, including:

Helen Patterson, founder of Town Centre Champions – Bedford said: “We Are Bedford proves that community spirit is alive and well in Bedford and people with shared goals or interests can come together well and really help effect positive change in our town.”

The success of We Are Bedford also led to one of its founders, Erica Roffe, setting up the Bedford Clanger which is published monthly and includes insights into Bedford’s cultural and independent business community.

More recently the group also led to the formation of the Bedford Independent online news desk which is filling the void of local news in the town and is attracting 60,000 readers a month.

“The We are Bedford group was the catalyst for many different things,” said Erica. “It brought together so many people with a similar attitude, people who wanted the best for Bedford.

“The aim of We Are Bedford has always been to be part of the solution, rather than just moaning about the problem.

“Despite the group growing beyond our expectations, that ethos is still at its heart.”

An example of the supportive nature of the group happened recently when member, Maxine Wraith, posted on 4 May encouraging other members to talk about what they love about Bedford.

“I decided to post my message because I was getting tired of the negativity I was seeing through feedback on other posts,” explained Maxine.

“All of this ‘why go to Bedford when Milton Keynes or Rushden Lakes are so much better?’ And in my opinion, they aren’t. Both serve a purpose, yes, but they aren’t Bedford.

“Bedford has a massive community feel, people look out for one another and support others’ endeavours. Why else were we named Britain’s most generous town?

“I wanted to remind people of what’s out there and what’s available. Some are places that are walking distance from their homes.

“Even I’ve found out about places I didn’t know existed; they’ve gone on my list to visit this summer.”

Maxine’s post prompted dozens of replies, with members sharing their ‘best of Bedford’.

A small team behind a big group

Out of the 17,000 members of We Are Bedford, around 15,000 are regularly active, posting, liking and commenting on group content, with around 2,000 posts each month.

Despite being the largest Bedford-based Facebook group, the team behind it is relatively small.

“Our team all work on the group in their free time and they do a fantastic job. Paul and Jane have been admins for a few years,” says Erica. “But the workload was rapidly increasing.

“So, about ten months ago we put a call out to members who wanted to help with the group and we had an enthusiastic response, this is when Chris and Michael joined the team.

“They’ve both been invaluable in helping not only keep the group on track but also give a different and independent perspective to how the group should be run.”

How the group is run has been the cause of some criticism over the years and some members haven’t always seen eye to eye with the group’s admin and mod team.

“Our guidelines have become quite infamous,” jokes Erica. “But they’re there for a reason and we believe they’re the reason the group has become so popular.

“We Are Bedford has a specific remit so we need to make sure the content matches that and people know what to expect when they log on.

“We know some people like to ‘have-a-go’ at the We Are Bedford team but for every comment of criticism received, we get ten times the amount of praise.”

In fact it’s down to We Are Bedford members that the guidelines are the way they are. Last year the team opened up the group to feedback with a members’ survey – an exercise they’re about to repeat again this year.

The survey helped the admin team update some guidelines and also evolve the scope of the group, helping it move away from its focus on Bedford’s cultural community.

Erica says this has really helped the group grow: “We Are Bedford used to solely focus on promoting Bedford’s cultural offerings and community projects. As time went on we realised members wanted more than that.

“Following feedback to our member survey we now allow everything from traffic updates to lost pets, from sporting events for young people to opening announcements for new businesses.

“We do still get a few criticisms, mostly from businesses who want to advertise, but we’re keen to keep the group advert-free as it could become inundated.

“But we listen to feedback all year round and we’re always open to new ideas.”

So, what’s next for the group? “Well, we hope it will continue to grow,” says Erica. “Our members are really the reason the group is popular, the content they share is always varied, useful and passionate and I’d like to encourage more of the same.

“While we will remain an actively moderated group, so the newsfeed isn’t just full of posts from one person, rants and moans, or the same thing over and over, we will continue to work with members as best we can to develop a place for the content they want.”