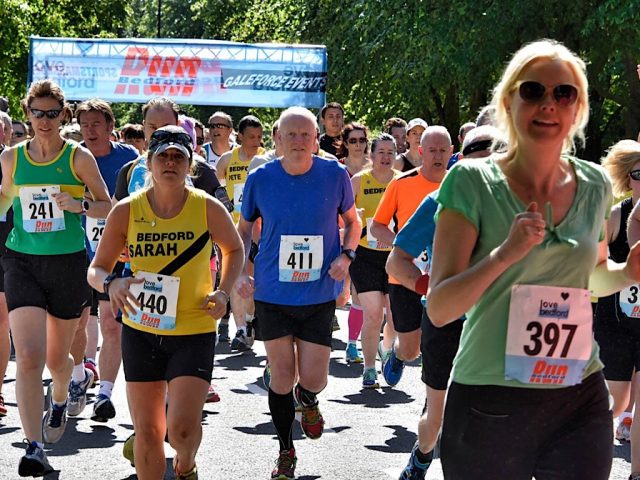 Starting on Bedford’s beautiful Victorian embankment, the fast and flat course takes in some of Bedford’s most picturesque streets.

The deadline to register is tomorrow (Wednesday 29 May).

Runners will breeze along the tree-lined Park Avenue, DeParys Avenue and Kimbolton Road and with just a mile to go they’ll be lifted by the crowds lining the High Street and finish in grand style alongside the River Great Ouse.

Among this year’s runners, over 130 participants will be representing #TeamGarrett to raise money in memory of Richard Garrett who lost his battle with cancer at the end of last year.

Richard worked at Bedford School and many of his former colleagues, friends and family are taking part.

Richard’s widow, Emma Garrett is aiming to raise £51,000 through a variety of events to donate to the Primrose Unit at Bedford Hospital and St John’s Hospice Moggerhanger.

“The number of people who have signed up to undertake this challenge is extraordinary,” said Emma.

“So many people are pulling on their trainers and putting themselves out of their comfort zone, it’s amazing. It’s testament to Richard and the number of people who’s lives he touched.

“We’re also really grateful to those not up to running who will be manning #TeamGarrett HQ and giving much-needed support around the route.”

At last year’s event, the youngest runner was 15 and the oldest 81. The course record is 30:52, so whether you’re a world-beater, a fun-runner or a fund-raiser, Run Bedford is a great chance for a personal best.

For full details of road closures around the event, please check here.