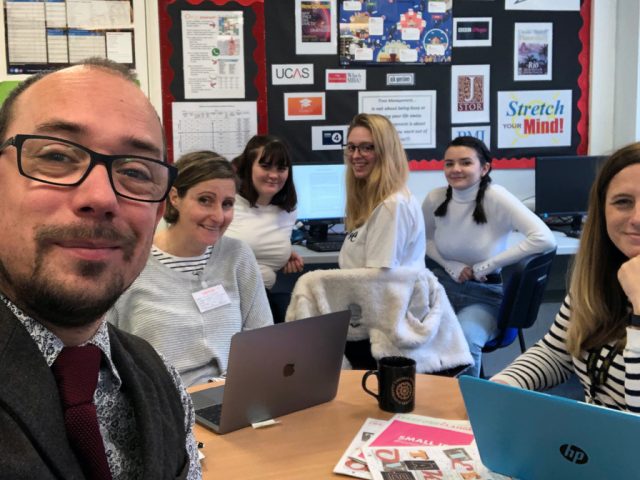 Bedford Independent set up its online news desk at St. Thomas More school this morning as part of Teen Takeover Day 2018 and its ongoing mission to inspire Bedford’s future journalists.

Teen Takover Day gives young adults a taster of what it’s like in the workplace and see if the careers they’re interested in are something they’d like to pursue.

At St. Thomas More School this morning, Bedford Independent joined The Bedford Clanger to help young writers with their writing skills and give them an insight into what it’s like in a busy newsroom, including how to deal with breaking news on social media.

Managing Editor at the Bedford Independent, Paul Hutchinson, said it’s great to see young people switched on to news, and wanting to be a part of it: “Working with Georgina, Cherith and Daisy this morning was inspiring. The three of them are very passionate about writing and it’s great to help encourage them further, as they may very well be Bedford’s future journalists.”

This morning’s sessions were just one part of the Bedford Independent’s commitment to the future of journalism. Paul Hutchinson has also been helping Bedford College film and media students see how their skills will be very useful in future news rooms: “A 21st century news desk needs 21st century skills. We must all encourage younger people with video and digital skills to consider journalism as a career, as more and more people are looking online for their local and national news fix.

“We’re now helping Bedford College students develop their own story ideas. These will then be used in their coursework on subjects that are important to them and to Bedford. It’s great to see we have very switched on and passionate young people in our town.”

Bedford College’s Tom Wild, the Lecturer leading the project said: “Contact with local organisations is essential for young people doing vocational courses. Working with the Bedford Independent is an excellent opportunity for our students to gain experience of real journalistic working practices within the media industries from true professionals.”

In last two years alone, thousands of children have taken part, stepping into the shoes of a wide range of adult jobs including everything from MPs, mayors, TV presenters and teachers to chief executives, business leaders and government officials.