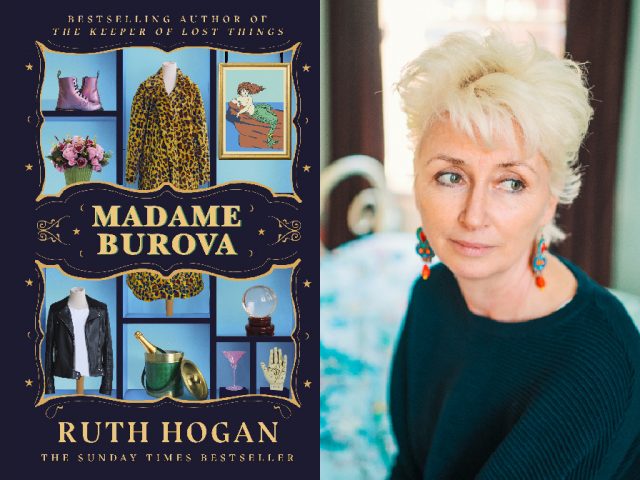 Bedford’s best selling author, Ruth Hogan, told the Bedford Independent that writing her latest novel, about clairvoyant Madame Burova, was a labour of love that is dedicated to her beloved parents.

Both of Ruth’s parents died within months of each other at the start of the first lockdown as she was completing her book.

“Writing is a sanctuary for me,” said Ruth. “Before they died, my parents told me that I must finish the book and their words were echoing in my ears.

“They were so proud that I had had books published so I wanted to finish this one in their memory.”

Ruth’s latest book takes place in Brighton, both in the present day and in the 1970s. The title character is a clairvoyant, tarot reader and medium and in preparation, Ruth spent months learning to read tarot cards with Sue Peppiatt of the Sanctuary on Harpur Street.

“I initially went for some readings with Sue and they were so accurate,” said Ruth. “I had spoken to Sue about the book and wanted to approach the subject respectfully and knowledgeably.”

Sue’s experience was invaluable to Ruth’s research, and she became the first person to read the finished book.

“Teaching Ruth was a great pleasure for me as her interest was intense,” said Sue, who taught Ruth to a professional level.

“I felt extremely privileged to be asked to read her first proof of Madame Burova and could see that she had really taken everything in, not only about the readings but the way that competent readers feel about their readings, and their calling.

“The story is, of course, a delight to read, I read it all over one very sleepless night, simply because I couldn’t put it down.”

Following the enormous success of Ruth’s debut novel, The Keeper of Lost Things, she was crowned the Queen of Uplit – uplifting literature – and her latest book is no exception.

“I always try and write about what I love and I try and balance out the dark and light in my books,” said Ruth.

“I absolutely love the piano players at St Pancras Station, so I knew I had to include one as a character in this book.

“The 1970s were a tough time in Britain, but setting part of the book in a holiday camp meant that I could incorporate lots of amazing, colourful characters which was great for my imagination.”

Ruth said that she felt comfortable writing the scenes set in the 1970s as it’s an era that she can clearly remember.

Less comfortable to write – and read – are the elements of 70s casual sexism, misogyny and racism that she has included, both towards mixed-race Treasure and Romany Madame Burova.

“I felt that to write authentically about the era I needed to reflect that side of the 70s. I could speak knowledgeably about it as someone who had lived through that era and who had experienced the darker side of that decade,” she said.

Fans of Ruth’s previous books will know that she has a knack for adding an unpredictable plot twist and the ‘big reveal’ in Madame Burova is – in this reader’s opinion – the best yet.

You can pick up a copy to find out for yourself from the Eagle Bookshop on St Peter’s Street which will reopen to customers from Monday 12 April.

And if you’ve already read the book, you can spot all the references – including a miniature Vardo – in the shop window.

“The response to Ruth’s book launch was entirely as expected – absolutely brilliant,” said Peter Budek, owner of the Eagle Bookshop.

“We ordered 200 copies for the launch on 1 April and over half of them were sold – with Ruth’s personal inscriptions inside – by the weekend.

“Great news for Ruth and her readers but maybe not so good for her wrist.”

Ruth told the Bedford Independent that she has got her next book ‘in her head’ but she’s going to give herself some time off before she starts writing again.

We’re certain that whatever she chooses to write about, the Queen of Uplit will once again do Bedford proud.