A unique ice cream van, stolen from Royston in Hertfordshire two weeks ago, has been located by Bedfordshire Police in Kempston Hardwick.

Three thieves were captured by CCTV after they broke into the company’s secure car park. The men smashed the van’s window and loaded it onto a flatbed truck before driving it away.

Hotel Chocolat CEO and co-founder, Angus Thirlwell, took to social media to offer a reward of free chocolate for five years and a tour of the ‘inventing room’ at their chocolate factory, in return for information on the missing van. 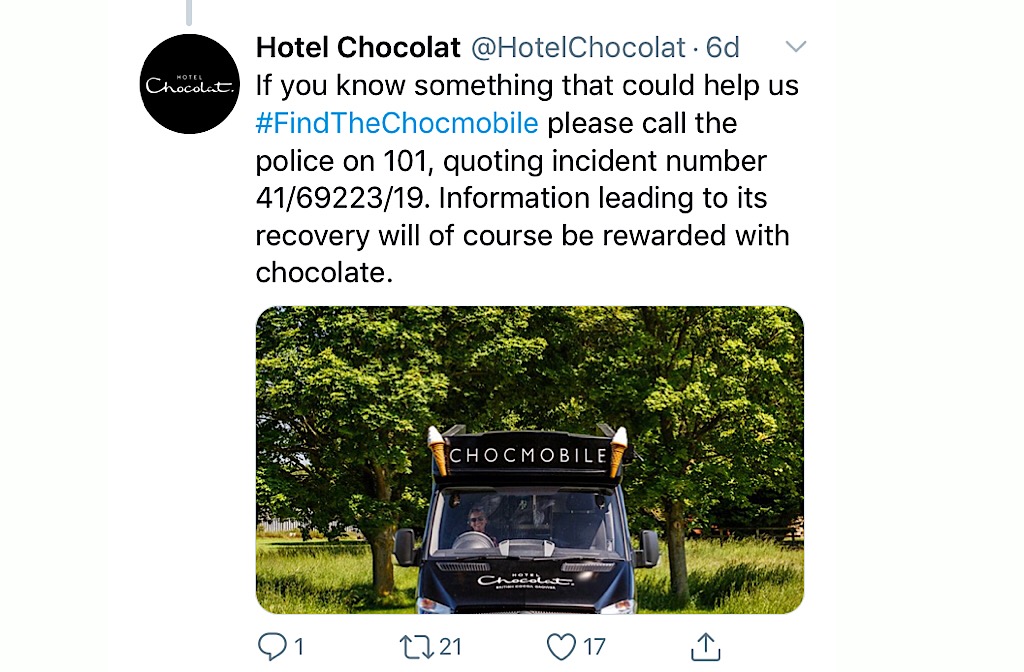 However, hopes that the van would be found intact were dashed when, on Monday (12 August), Bedfordshire Police located the van along with a number of other suspected stolen vehicles at a caravan site in Kempston Hardwick.

“The discovery was made after officers visited the site following a report received at 6.05am of two vans being stolen from the area,” said a Bedfordshire Police spokesperson.

“The Hotel Chocolat vehicle was burnt out and not able to be recovered.

“Bedfordshire Police will now support Hertfordshire Constabulary in its investigation into the theft. Anyone with information is urged to contact them on 101 quoting the Herts reference 41/69223/19.”

The van, which would visit festivals and conferences selling the retailer’s wares, had been due to appear at a BBC Countryfile event prior to the theft.

“We’re working on Chocmobile #2 and will get it on the road soon, dispensing chocolate happiness up and down the country,” said Angus Thirlwell.

“Although we weren’t able to recover the Chocmobile, Bedfordshire police force did a sterling job of locating it for us. That’s why we’re giving them a year-long subscription to our Tasting Club.”