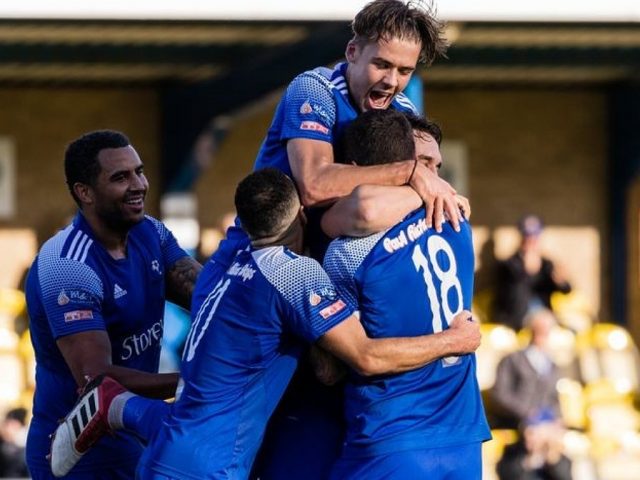 A 35-yard barnstormer from centre back, Charley Sanders sealed a hard-fought 2-0 victory for Bedford Town this afternoon to open up a five point lead over visiting Berkhamsted in Southern League Central Division One.

A bumper crowd of 1,254 squeezed into the Eyrie on a key day in the league calendar; with the Eagles knowing a win would give them the advantage in a yo-yo season at the top.

Both sides have opened up a sizeable gap to third place in the division, but with only one automatic promotion place, this afternoon’s grudge match was all the more important.

The opening minutes were scrappy, setting the tone for the remainder of the game; both teams struggling to keep the ball on a rough surface, and any long ball over the top hampered by the strong wind blowing across The Eyrie.

Chances were few and far between; the main action coming in the middle of the park as Callum Donnelly and his opposite number swapped blows and words in the tense opening moments.

The strong wind mixed with the uneven nature of the playing surface left both teams frustrated, although Bedford Town had the better of the ball as the first half came to a close.

Both sides looked to be going into the break goalless, before Hugh Alban-Jones stole the ball just inside the area and proceeded to be tripped, giving the referee no choice but to point to the penalty spot.

The ever-confident Rene Howe stepped up and slotted the ball down the middle to give Gary Setchell’s side a valuable 1-0 lead at half-time.

The second half began the same way as the first; any inkling of a Berkhamsted attack snuffed out by an impressive Bedford defence, while Howe and Connor Tomlinson occasionally caused problems at the other end.

There were, predictably, occasional flashpoints throughout the game but they were quickly flushed out by the steadfast officials, who were keen to avoid the game becoming a feisty affair.

A late tackle on Donnelly on the hour mark could have seen a red card, only for the referee to produce the first of three yellows, much to the derision of Donnelly who put in a real shift in centre midfield before being substituted.

The encounter was turning into a game of two defences; with both sides putting everything on the line to protect their goalkeepers to keep the game in the balance.

That was before Charley Sanders, arguably the man of the match from centre back, intercepted a long ball on the halfway line and unleashed a piledriver from over thirty yards that flew into the back of the Comrades’ net.

Sanders’ celebration was almost as good as his strike, hit with such venomous power that the Berkhamsted keeper couldn’t get a hand to it to all but seal the three points for Bedford Town.

Berkhamsted’s attacking efforts were restricted to snap shots from outside the area; Town keeper, Alex Street rarely troubled throughout the ninety minutes as he kept another clean sheet.

Will Summerfield caused a few problems for his former team’s defence late on for Bedford Town, but they closed out the game with ruthless efficiency to open up a five point gap at the top of the table.

It wasn’t a classic by any means. Shots on goal were a rarity and most of the action was played up in the air, but Bedford Town won’t care as they come away with an invaluable three points.

“A fantastic win, but it’s not the end of it”

Gary Setchell was delighted after the game, but was cautious in getting ahead of himself with twelve fixtures remaining.

“We can’t get away from the fact it was a scrappy affair, but I felt we had the measure of them today and always felt we were going to come out on top.”

“This was probably the hardest test in the league, but we made them look second best in most departments today.”

“Whoever won this game, it was never going to be the end of it, we’ve got a tough fixture against FC Romania next week. Let’s not celebrate too early”

However, there were jubilant scenes in the Eagles changing room after the game and the magnitude of the result can’t be played down as Bedford Town now hold the key to their own fortunes.

The games don’t stop there; Bedford Town are back at The Eyrie next Saturday in an attempt to rubber stamp their advantage against FC Romania.