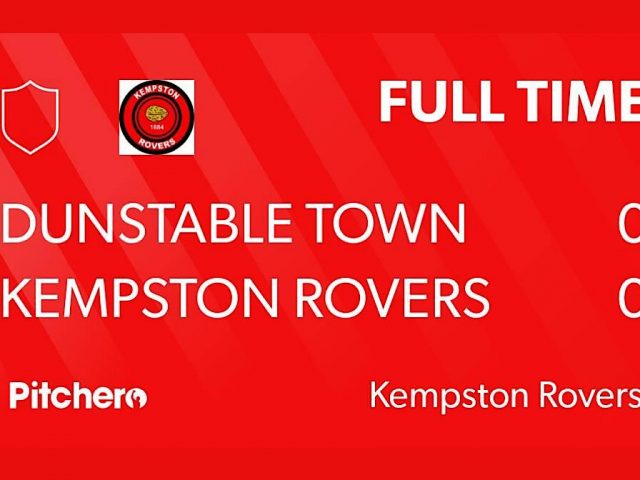 Kempston put the disappointment of Saturday’s defeat out of their system with a resilient display at Creasy Park against Dunstable Town.

A late change to the starting line up saw Lewis Jones handed his first start for the club after Akubuine pulled up in the warm up.

Rovers had the first sight at goal after just two minutes play. Great work down the left from Cameron Hyde saw the ball fall to Scott Joseph, but his volley was saved well by Coulson. Moments later, Goldbourne should have put the hosts ahead, getting in behind the Rovers back line only to skew his shot just wide.

James Martin produced an amazing reaction save shortly after the quarter hour as a cross from the right was deflected back into the danger zone off Hyde, where Chris Wreh was waiting to stab the ball home, only to see Martin spring across his line and divert the ball out of harm’s way.

Joseph had another chance on the half hour, but his speculative volley was over the mark.  Martin produced another top save moments later when Wreh again threatened with a deflected shot, but Rovers giant keeper again proved his worth.

Shane Bush, acting as a target man for this game, forced Coulson into action late in the half with a flicked header into the far corner that needed a reaching save to keep it out.  Rovers perhaps shaded the latter part of the half, but failed to find the decisive cutting edge.

Ten minutes after the break, Dunstable should’ve taken the lead. A whipped free kick from Okito found the head of Saul Williams, completely free in the six yard box. Somehow the Town man contrived to head wide when it appeared easier to score.  The same player then did force a smart save from Martin when he shot through a crowd of bodies in the area, Martin gathering cleanly at the second attempt.

Midway through the half a deep Kempston cross was nodded down by Scott Joseph in to the path of Shane Bush. The Rovers’ skipper lashed his shot just wide of the mark with what was perhaps the clearest opportunity of the night for the Walnut Boys.

Nathan Tshikuna found the side netting after neat work following a throw in down the left hand side, before he released a glorious cross field ball to sub Evan Beldon, who drove at the heart of the Dunstable defence, before stinging the palms of Coulson in the home goal.

Beldon then very nearly turned provider, breaking away down the right and cross in for the sliding figure of Shane Bush. The faintest of toe-ends on the ball sent it onto the post. Firmer contact would have resulted in a certain goal and the perfect smash-and-grab away performance, but both sides had to be content with a point.

The result keeps both sides where they were in the table, fifteenth and sixteenth respectively. Rovers next encounter is on Saturday when they host Corby Town. Kick off at Hillgrounds is at 3pm.