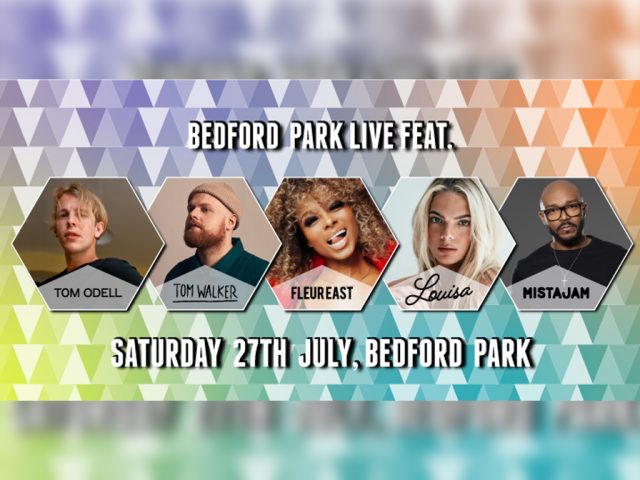 Rita Ora has pulled out of her headline spot at Bedford Park Concerts leaving organisers and fans devastated.

The singer, who has recently performed at the Montreux Jazz Festival in Switzerland and performed at Amazon’s Prime Day concert in London this week, has cancelled her Bedford appearance due to “unexpected scheduling issues”.

But, the small, independent, Bedford based team have pulled off a sensational replacement line up.

Speaking to the Bedford Independent this morning, Bedfordian Mark Harrison has asked us to publish a personal statement.

“When we learnt about Rita Ora cancelling her Bedford appearance, our first thoughts were to the fans and making sure they still have a night to remember.

“Our small Bedford based and independent team have been working tirelessly to bring the best artists in the world to play in Bedford Park over the past 25 years.

“To have secured Rita Ora for this year’s Bedford Park Concerts was a proud moment, not just for me personally but also on behalf of this great town that deserves to host acts of this stature.

“We fully understand there are times when an act has to cancel. We must continue to deliver a great concert for those loyal music lovers who have supported us by coming to our concerts, whether that is for the first time this year or year after year.

“Myself and my dedicated team have worked around the clock and I’m pleased to say we have managed to secure three incredible replacements acts.

“I hope with the announcement of these acts, our concert goers will be excited by the new sensational line up which is turning out to be one of the best programmes of entertainment we have ever had.

But LPH Concerts have managed to secure two of the most exciting singer songwriters in the UK right now, and an exciting up and coming artist, pulling an incredible replacement line up together in record time.

Ivor Novello- winning singer songwriter and master of the ivories Tom Odell, is known for his blistering live charismatic sets.

While he entertains the crowds with true style and showmanship, his emotional piano led songs have seen him win a Brits Critic’s choice award and an Ivor Novello.

Tom Odell is at the very top of his game, with multiple awards and 1.8 million sales under his belt.

Songs such as ‘Another Love’ saw him shoot into the top ten charts and his debut album ‘Long Way Down’ went straight to number one.

His following two albums also reached the top five in the album charts and his new album ‘Long Way Down’ is described as a career defining record.

Other stand out hits include ‘Real Love’, ‘If you Wanna Love Somebody’ and ‘Magnetised’. Tom Odell live is an experience not to be missed, he is an electrifying live performer with his own signature style.

The Second act to step in to replace Ora is winner of the Brit Awards ‘British Breakthrough Act’ Tom Walker.

Fresh from a stunning Glastonbury live set, Tom is heading to Bedford Park to ensure it’s a night to remember.

Scottish born, made in Manchester, singer-songwriter broke through with his international hit single “Leave A Light On” which became one of the biggest songs of 2018.

“Leave a Light On” hit the #1 spot in the iTunes chart in 17 countries including the UK and has sold over 2 million copies worldwide (300 million streams globally).

Tom Walker has sold out his own headline shows all over the globe as well as supporting great artists like George Ezra and The Script. He has played over forty festivals this year alone.

His debut album ‘What a Time to Be Alive’ went straight to number one in the album charts.

Another act has also been added to the line-up.

Louisa Johnson won the 12th series of X Factor and has gone from strength to strength with a series of hits including her duet with Olly Murs ‘Unpredictable’ and her smash hit with Clean Bandit ‘Tears’. Louisa will be opening up the concert at Bedford Park.

Tom, Tom and Louisa, will join other acts Fleur East and as planned Radio 1 DJ MistaJam will close the night with a DJ set.

The LPH Concert’s team say, despite the disappointment with Rita’s cancellation, they are absolutely delighted with the new line up.

“I hope with the announcement of these acts, our concert goers will be excited by the new sensational line up which is turning out to be one of the best programmes of entertainment we have ever had,” added Mark Harrison.

LPH Concerts and Events say that if any Bedford Independent readers have purchased their tickets electronically, they will shortly receive an email from the ticket vendor with instructions on what do to next.

Due to the change in headline act, there will be a refund process for to follow within the next seven days, before tickets are automatically transferred to the new line-up.

Refund requests made after the seven day notice period will be declined.

If you have purchased your tickets from any of the Bedford outlets, you are entitled to return them to the outlet where you purchased them within seven days from today (12 July), for a full refund.

If you still wish to attend with the new line up all existing physical tickets from these outlets will still be accepted on the night.

“We sincerely hope you, as loyal customers, will continue to support the new line up and enjoy a great night in Bedford Park,” said a spokesperson.

If you haven’t already got tickets you can get yours at the Bedford Park Concerts website.