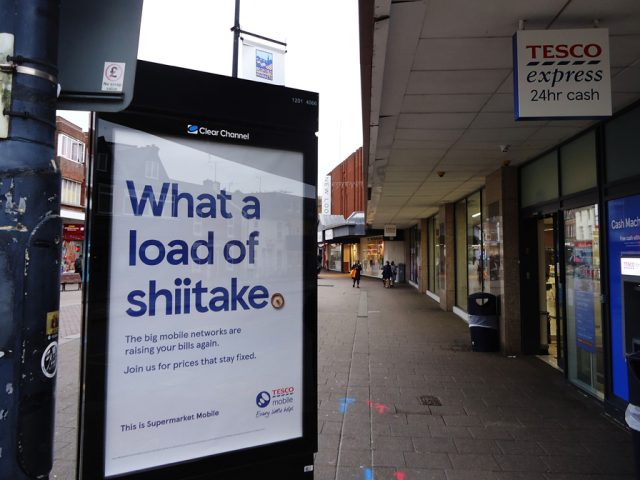 A Bedford resident has complained to a supermarket’s head office saying he’s “shocked and saddened” at the wording in one of their billboard adverts.

The resident has asked Tesco’s to remove the offending advert which is displayed outside their store on Midland Road.

The ad, part of a campaign raising awareness of the company’s mobile phone tariffs, uses the word ‘shiitake’ mushroom in a sentence, replacing a more offensive term.

A Tesco Mobile spokesperson defended the pun, telling the Bedford Independent: “We don’t mean to cause any offence. We know the frustration that consumers face when they notice their bill going up mid-contract.

“We’re reflecting their frustration – and ours – in our ads.”

They did not comment on whether they would be taking steps to remove the advert.

Speaking to marketing website, The Drum, BBH creative director Uche Ezugwu – who developed the campaign – said: “As soon as I heard about this proposition, I knew this was too good an opportunity to pass up.

“It’s not often you get to vent your anger on a poster and talk about mushrooms at the same time.”