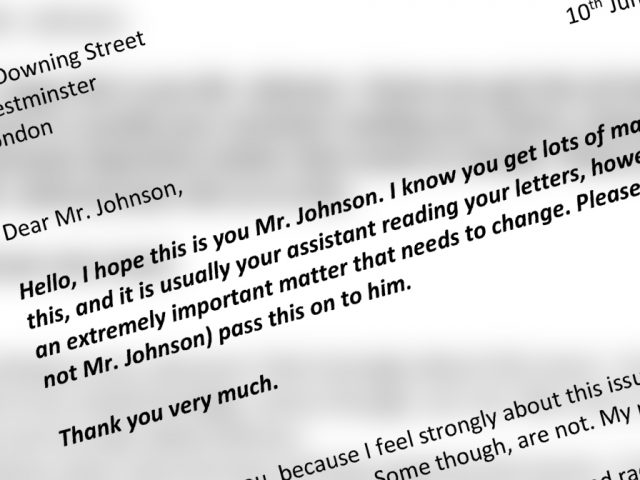 An 11-year-old Kempston girl has written to Prime Minister Boris Johnson to plea with him to do “as much as you can to prevent racism”.

Martha, who attends Camestone School in Kempston, wrote to the PM in the wake of the murder of George Floyd, who was killed in Minneapolis, USA by a policeman on 25 May.

In her letter, she described her own experiences: “I am eleven years old and have already experienced racism.

“I have experienced it at shops, in schools, and when I have been just walking to or from places.”

In her heartfelt letter Martha added, “racism is quite popular, which is awfully bad”, and asked the Prime Minister do as much as he can to prevent racism.

“This is a very important issue around the world,” she said. “I hope you can do something, and you don’t just throw this letter away and ignore it.”

Martha also gave some ideas that could help raise awareness of racism and tackle it head on.

“I believe that there should be so many more posters, adverts and events at schools, she suggested.

“Things like this will have people talk about their worries if someone was being racist to them. We should make anti-racism protests/events even more popular.”

Reading the letter, Pauline Stepney and Rosie Newbigging from Stand Up to Racism Bedford applauded Martha.

“Martha’s letter is incredibly powerful and deeply moving,” they said.

“It is a sad statement on British society that Martha has had personal experience of racism, already by the age of 11.

“What saddens us also is that there is no longer an official body locally to challenge racism since the loss of Bedford Race Equality Council.

“Many young people, like Martha, are at the forefront in the fight against racism and provide hope for the future.

“There is much work to be done to tackle race hate with hate crimes more than doubling in recent years.

Keir Starmer, Leader of the Labour Party, was copied into the letter, as was Mohammad Yasin, MP for Bedford and Kempston (Labour).

Mr Yasin said: “Whilst I was so proud that a young person could write so eloquently on such a difficult issue and be moved to act to make a difference, I was saddened that the scourge of racism has already fallen on her young shoulders.

‘This cannot go on. We all need to take a stand and I have already called for a review the history curriculum by historians and advocates black and minority ethnic (BAME) backgrounds.

“The Prime Minister must listen to young voices like Martha’s before another generation of British children is scarred by hate.”