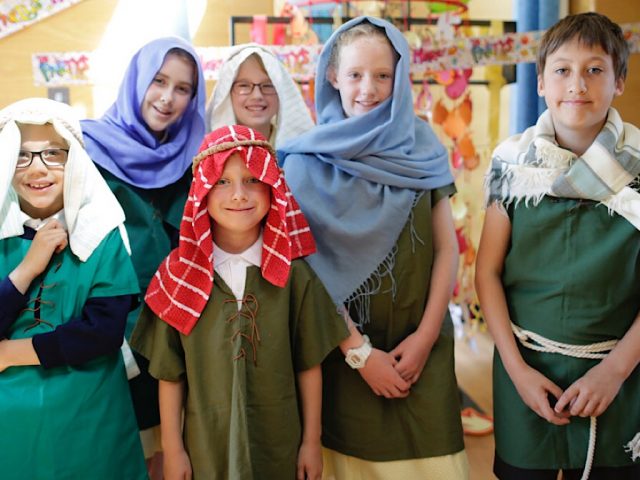 Around 300 people are expected to attend the 20th anniversary celebration of Open the Book on 1 October at All Nations’ Church Centre in Bedford. The service will be led by Canon Richard Hibbert, Rural Dean of Bedford.

Open The Book is now a nationwide project which offers primary school children the chance to hear the major stories from the Bible, brought to life by a team of people from local churches, who present the stories during assemblies, using storytelling and drama in a fun and engaging way.

Bedford was the first place to take up Open the Book in 1999. There are now 190 volunteer storytellers across the county, based in 48 schools, bringing the main stories of the Bible to children such as Jonah and the whale.

Anita Barker, head teacher at Scott Primary School, Bedford said, “Our children are enthralled, and they always remember the stories from week to week.

“The stories appeal to the younger and the older children. You can tell this when you look at the children, they are so captivated by the stories.”

Val Ralston, spokesperson for Open the Book said, “I feel overwhelmed to be celebrating 20 years. I never saw this as possible.

“Stories like this are still relevant. I can’t see anything that is out there on social media that could replace a team acting out a story. The children enjoy being part of something fun.”

Open the Book is a national organisation, working with a wide range of faith and non-faith based primary schools. In 2007, a national charity was formed. Open the Book then joined Bible Society in 2013 after a significant increase in volunteer numbers.

The event will celebrate 20 years of storytelling in primary schools and will be attended by teachers and storytellers. Bob Hartman, author of The Lion Storyteller Bible and Professor Paul Williams, CEO of Bible Society will deliver messages at the event.

Bob Hartman, the author of The Lion Storyteller Bible, said, ‘The fact that the Bible assembly is the best assembly the kids get is remarkable. The fact that we are in all these schools is above and beyond everyone’s dream.’