Bedford’s first ‘living wall’ has been installed on St Cuthbert’s Street, thanks to a collaboration between businesses and a grant from Bedford Borough Council.

Over 11 square metres of over 1,000 plants have been added to the exterior wall of St Cuthbert’s Arcade as part of a project spearheaded by Rosanna Heasman, owner of The Store.

The wall was painstakingly designed and built by Alan Cooley of Silverfields Living Walls, and grown off-site at his farm in Stevington, ready to be installed, with the help of Steve Richardson, this week.

The Store, which opened in 2019, is Bedford’s first refill shop where customers are encouraged to bring their own containers, bags and jars to fill up with food to remove the need for much single-use food packaging and help people reduce their waste.

The wall feels like a physical manifestation of The Store’s ethos. As well as brightening our streets and dead concrete spaces, living walls have an impact on people’s mental health as well as many benefits for the planet.

Costing around £10,000 to build and construct plus maintenance costs, this wasn’t a project Rosanna could do on her own. She successfully applied for a grant through Bedford Council to secure £8,000 towards bringing her vision to come to life.

“I’ve wanted to build this living wall for some time, and after a really sh*t year in 2020, it felt like a good time to just do it and hopefully lift our spirits,” Rosanna told the Bedford Independent.

“Being in and around nature has a calming effect on us and is so naturally beautiful in every situation and season. In an increasingly concrete world, we’ve destroyed and removed so much of what was here before us, forgetting how needed it is for us to survive on this planet.

“I wanted to bring a slice of nature to our urban street and as an effort to contribute to the health and healing of our planet.

“Now it’s in place, it’s even better than I had imagined.”

The site, which gets very little direct sunlight, proved quite a challenge for Alan when he was selecting suitable plants. But, he says, “a plant exists for every location.

“The most important thing is to understand the type of shade, general conditions and of course plants that we know thrive on the vertical in damp, well-drained soil conditions around the roots.

“Although it’s effectively a hydroponic system with organic plant food delivered in the water, it’s important the plant sits happy in its pocket.”

The formerly cold and inhospitable corner of St Cuthbert’s Street has become a verdant oasis with 22 types of evergreen perennials (plus a few surprises), with a mix of leaf and flower colour.

“Rosanna wanted as much green area as she could get for her budget,” said Alan.

“We have squeezed in just short of 12 square meters with plants such as Fatsia japonica, which will provide scale to the plan and is happy in most conditions. Ajuga reptans ‘burgundy glow’ will give the scheme a stunning shock of blue in the spring along with Helleborus niger, being probably the first to flower.

“Four varieties of fern, including Polystichum polyblepharum will provide the backbone of the living wall along with Acorus gramineus ‘ogon’. Saxifrage arendsii ‘purple carpet’ will give the wall a summer-long carpet of purple.”

The living wall was built in sections on the Silverfields’ smallholding in Stevington and was matured for two months before being installed in its new home.

Not only does the wall look amazing, but it’s good for us too. Plants filter particulate matter from the air and convert CO2 into oxygen.

At 11 square metres, this living wall will extract roughly 25.3 kg of CO2 per annum from the air and produce 18.7 kg of oxygen.

Walls like this act as sound barriers reducing urban noise levels, absorb sunlight to create cooler climates and increase biodiversity, all positive effects for the planet. 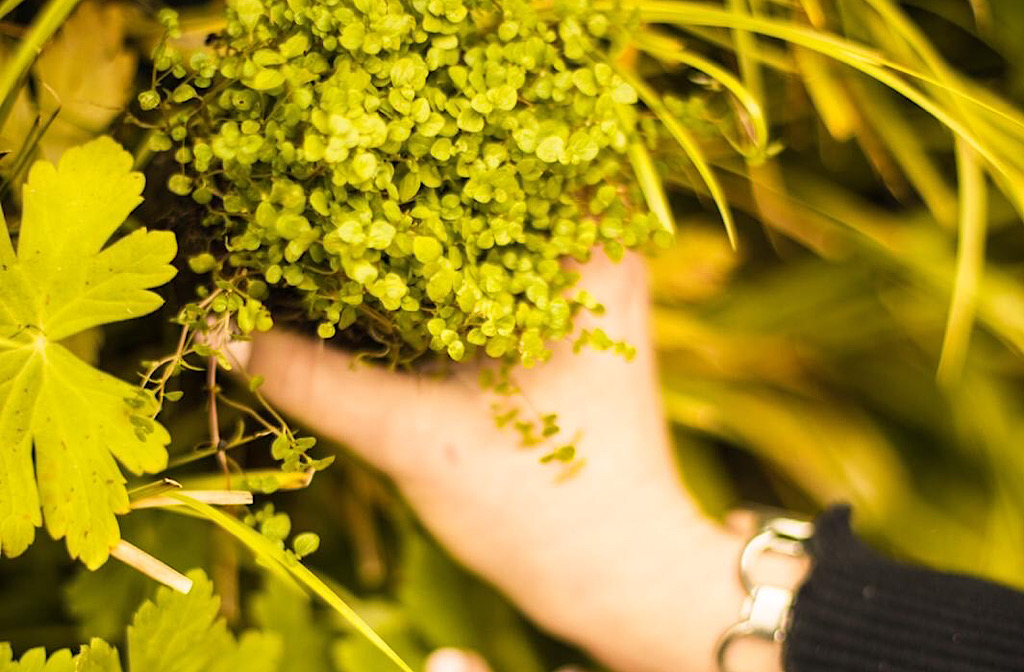