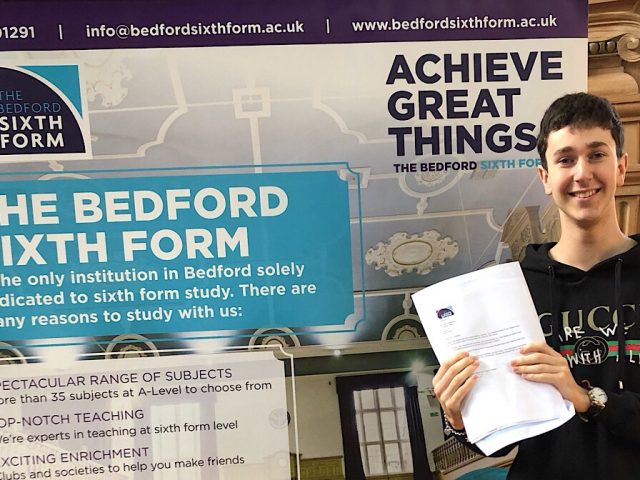 Throughout the day we’ll be adding each school’s results as we receive them.

Please keep checking back for the latest updates. 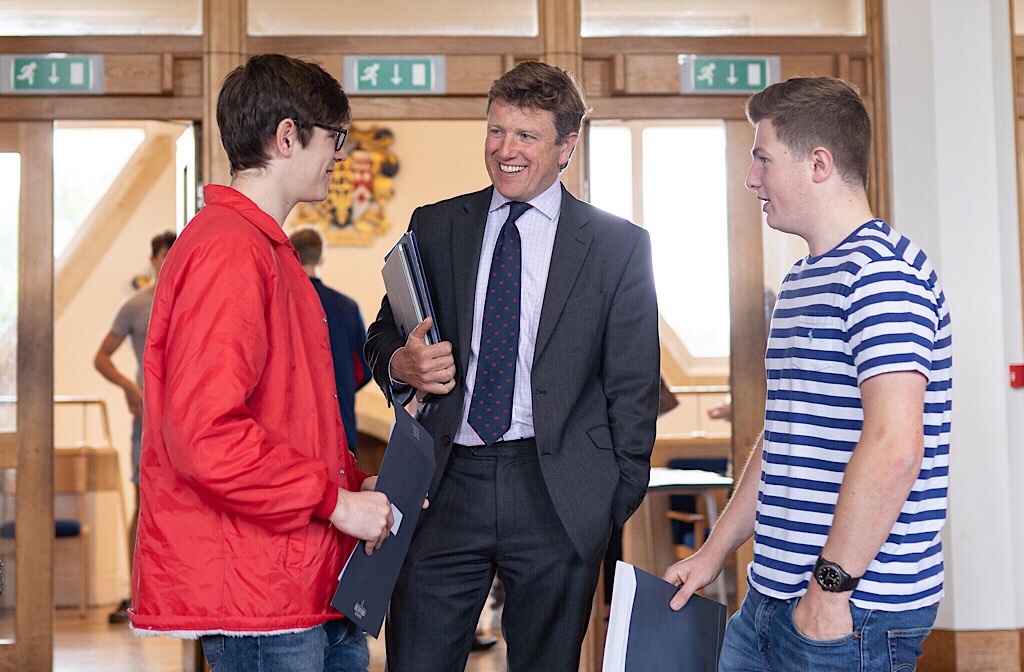 Bedford School is celebrating success with its IB and A-level leavers this summer as they take up a wide range of university courses and opportunities.

Almost three-quarters of papers were marked at A*-B grade.

Three mathematicians: Thomas Pelling, Harry Chen and Henry Shaw, scored 8A* and 4A grades between them to secure places at Cambridge, Oxford and Warwick respectively.

Music success also featured strongly for the year group. Silas Sanders and Felix Asare will take up their offers to read Music at Cambridge – Silas with a Choral Scholarship. Boys are also set to read music at the Royal Northern College of Music and Durham, and Music Technology at Coventry and Nottingham Trent.

Two physicists are set to further their talents, with Trystan Coveney scoring 5A* grades to read Physics at Imperial College, and Zory Davoyan (who left the school in 2016)returning to the UK after military service in Armenia to take up his place to read Physics at University College London.

Arthur Marie will read Fashion Marketing at University of the Arts London. Arthur called upon the experience of Careers Officers at both Bedford School and Bedford Girls’ School for his application – a great example of the two schools working together. 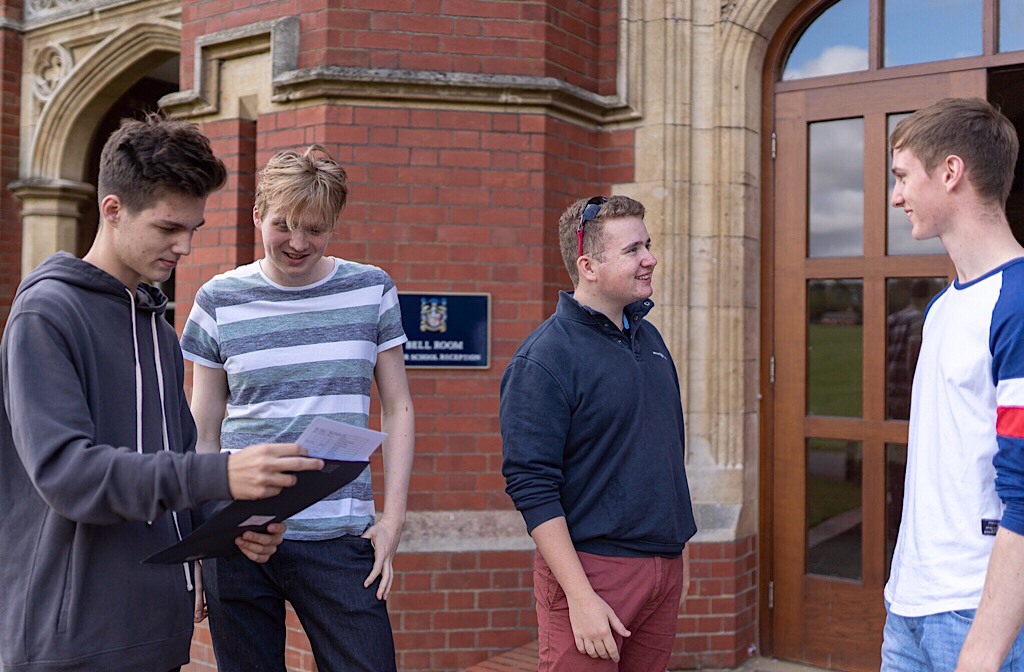 A special mention must go to Sung Yat Ng, who not only achieved 3A* to read Medicine at Birmingham but also proved a wonderful ambassador of Chinese culture during his time at the school.

Away from the UCAS system there were further success stories, including Trent Abraham who takes up a rowing scholarship at Syracuse University in New York, Marco Sarrowho has won a place on a degree apprenticeship scheme with international aerospace firm, Airbus, and Luca Maier who will begin an apprenticeship in hotel management in Munich.

Bedford School Head Master, James Hodgson, said, “Well done to the leavers of 2019 on some fine results across all disciplines – we are proud of them all.

“Academically, they have made their mark, and they have had copious success on the sports field, the music halls and in Art and Drama.

“They leave with wonderful memories and a great foundation for the future; and we wish them all well as they set out on their various paths.” 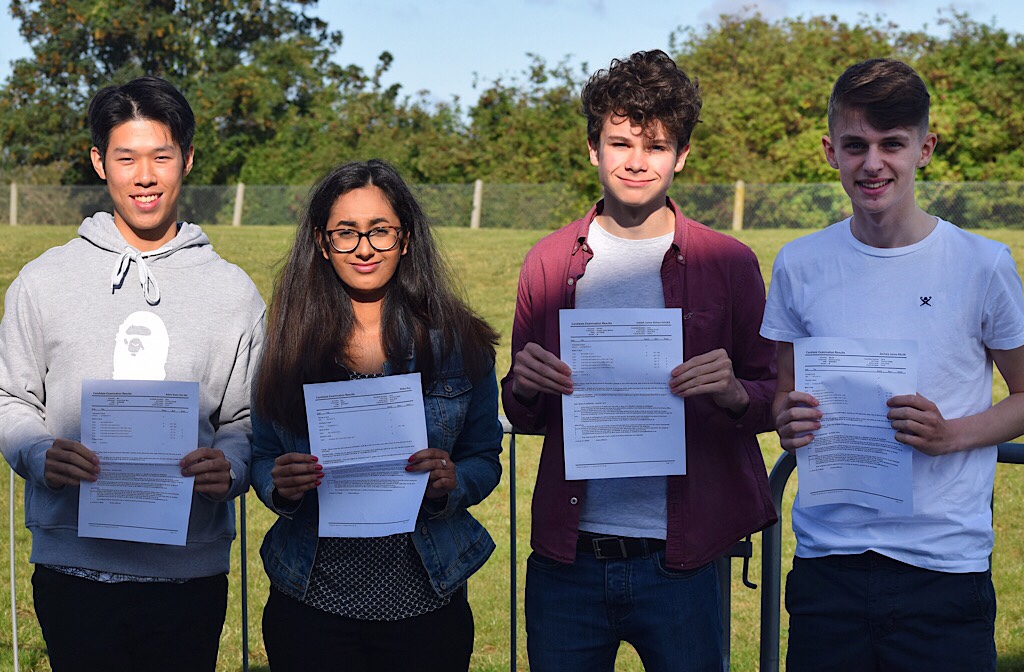 Four students obtained four A*s each. Adam Wu and Joseph Davies both studied Chemistry, Physics, Maths and Further Maths while Zachary Wilde achieved his grades in the same subjects but took Biology instead of Physics.

She said:“I am ecstatic, rather overwhelmed and very surprised!” She joins a further 10 BMS students who have secured highly competitive places to study medicine or dentistry.

Bedford Modern School Headmaster, Alex Tate, commented: “This is a super set of results, and in the midst of syllabus change and an increase in unconditional offers this year the achievement is all the more impressive.

“That 28% of students obtained three A grades or better is simply tremendous.” 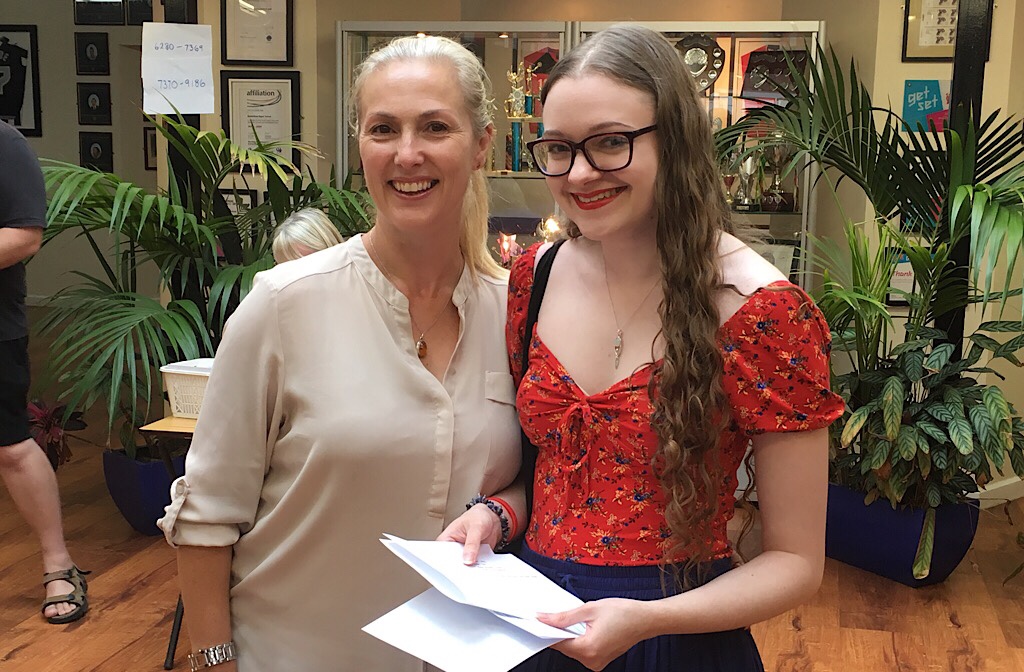 “Teachers at the school are delighted by the results,” said Alan Brown, Director of Sixth Form.

“We are exceptionally pleased that students are able to go to where they want to be on the next step of their journey through life – whether it be University or Higher Level Apprenticeships.

“The students have worked hard to achieve their results and success and a high proportion achieved their first choice at their preferred university.

“They have been a lovely group to work with and I am sure they will all go on to do great things. We will miss them and wish them every future happiness.” 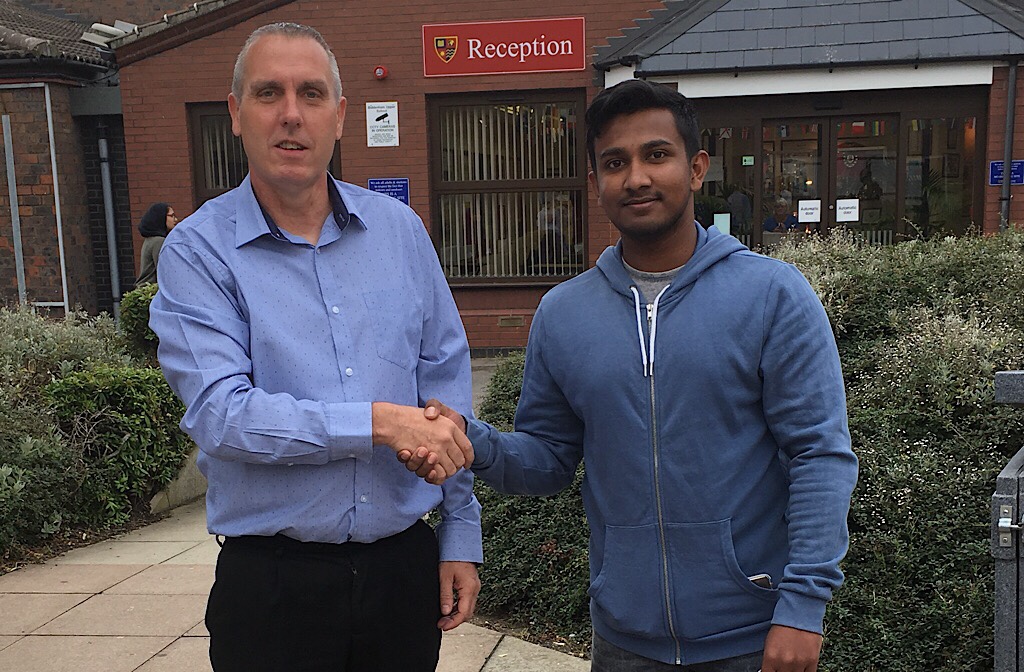 Abi has accepted a place at Birmingham University to do Chemical Engineering, whilst Michael Jones is off to Southampton to study Computer Science. 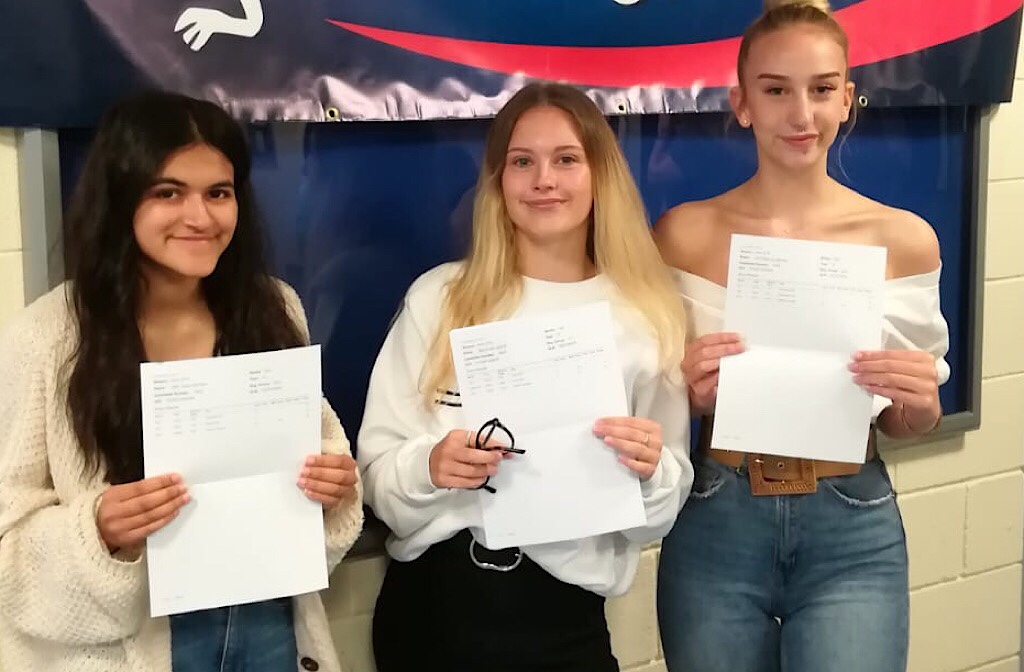 Mark Rutherford School are celebrating with over thirty of the A-level courses on offer achieving a 100% pass rate.

Over 36% of all A-level results were graded at A* or A, and 50% of students have achieved at least one A* or A grade.

Students progressing on to university are going to be studying a wide range of courses including business management at Kings College London, mathematics at Nottingham, psychology at St Andrews, chemical engineering at Nottingham and veterinary science at the Royal Veterinary College.

A number of students have also secured employment and two students have been accepted on to highly selective and prestigious apprenticeships, one with the Foreign and Commonwealth Office and the other with The Sangster Institute in Cambridge. 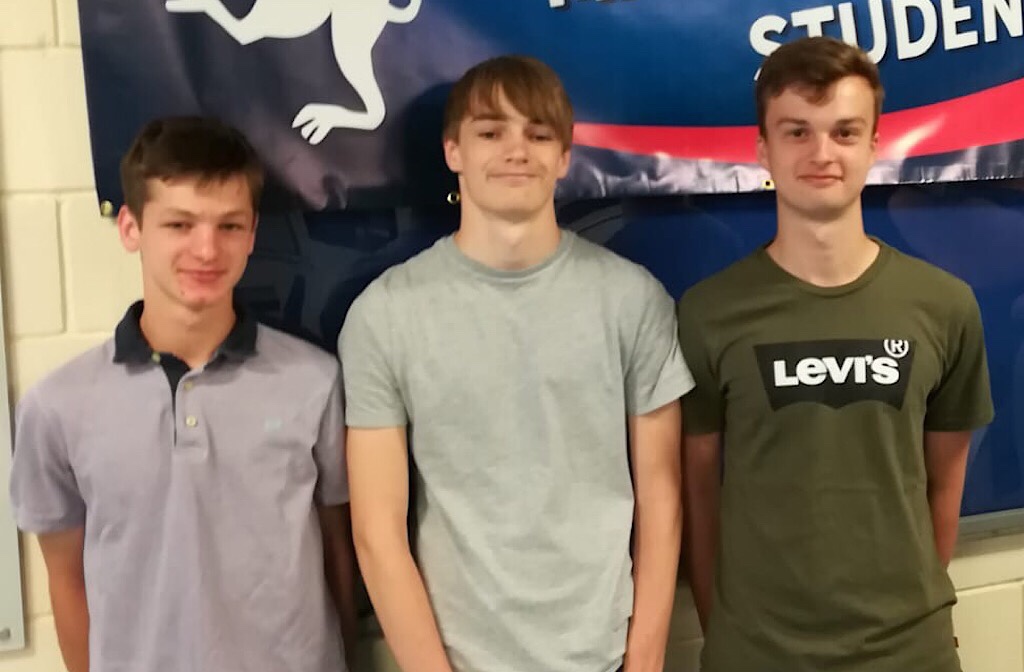 Mark Rutherford School are celebrating with over thirty of the A-level courses on offer achieving a 100% pass rate.

Over 36% of all A-level results were graded at A* or A, and 50% of students have achieved at least one A* or A grade.

Students progressing on to university are going to be studying a wide range of courses including business management at Kings College London, mathematics at Nottingham, psychology at St Andrews, chemical engineering at Nottingham and veterinary science at the Royal Veterinary College.

A number of students have also secured employment and two students have been accepted on to highly selective and prestigious apprenticeships, one with the Foreign and Commonwealth Office and the other with The Sangster Institute in Cambridge.

Bedford Girls’ School is celebrating the success of its results with over 45% of all entries (A-level and International Baccalaureate Diploma combined) achieving A*-A grades.

Over one third of the A-level cohort gained three A*-As or more.

56% of Bedford Girls’ A-level Mathematics entries achieving A*-A, and over 50% of A-level entries across Modern Foreign Languages (French, Spanish and German) achieving A*- A.

Students are also exploring alternative routes into the working world with a number of girls choosing to take up apprenticeship programmes, including roles in the Motor Sports and Fashion industries.

“They have persevered and worked hard, but a BGS education is not solely focused on examination results.

“For me, what is more impressive is seeing how our students have developed into confident, forward thinking young women with a depth of intellect and understanding which will enable them to flourish in whichever direction life takes them.

“I am exceptionally proud of all of their achievements and I wish them every success for the future.”

64% of Bedford Academy students achieved at least one A or A* grade – a significant improvement on the school’s 2018 results.

Saajan Gill achieved A* in chemistry and maths and A in physics and further maths, securing his place at Cambridge University to study natural sciences. 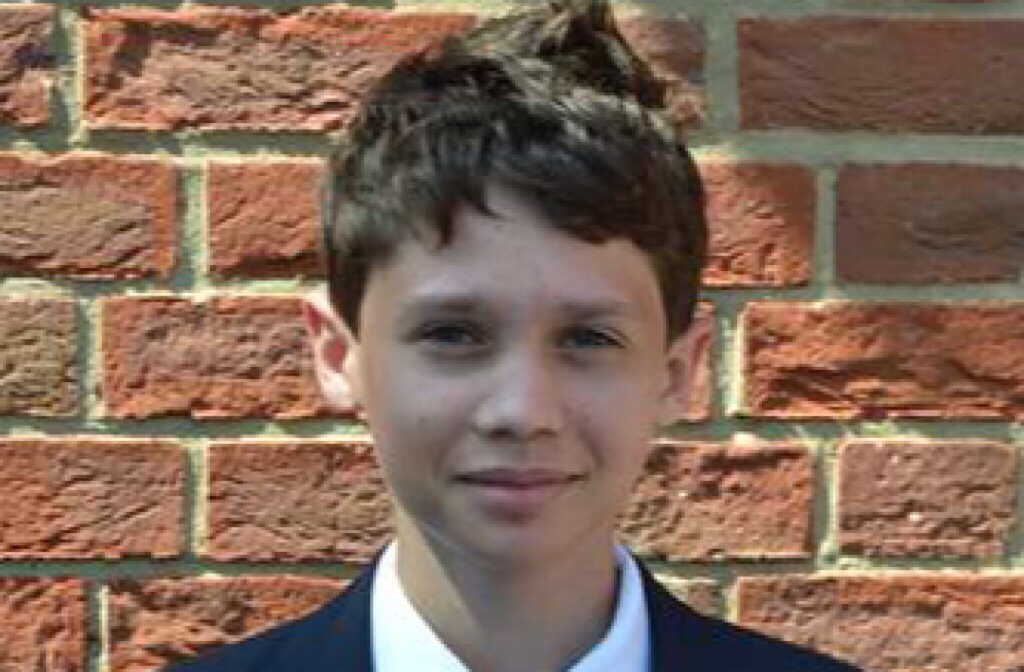 The schools’ joint sixth form opened three years ago, with the majority of its second A -level cohort achieving the grades they need for university.

Sanidhay Kashyap achieved grade A’s in Biology, Chemistry and Maths and special mention must go to year 10 student, Olivier Gaillard (pictured), who achieved a grade A in Mathematics having completed the examination three years early.

18-year-old Joe Chidwick from Bedford Sixth Form is off to Cambridge University to study philosophy after achieving 2 A* and an A in his A-levels.