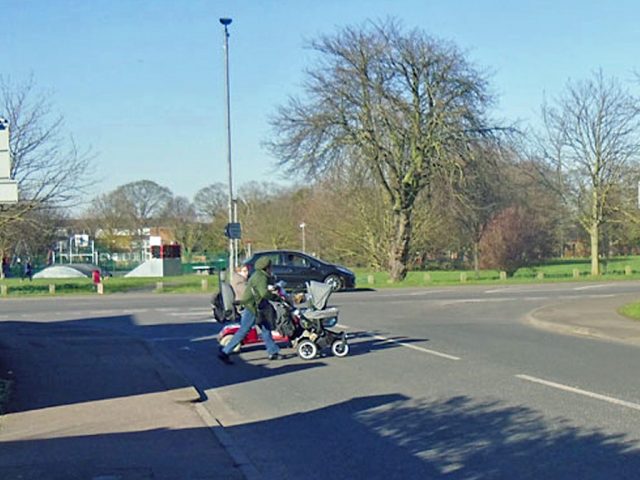 Cycling Campaign for North Bedfordshire (CCNB) does not agree that the new mini-roundabouts installed on Goldington Road are a success.

The improvement in traffic flow has made crossing the already hazardous Barkers Lane at its junction with Goldington Road even more dangerous for vulnerable residents  – pedestrians, particularly the less nimble, those with young children and pushchairs, wheelchairs and mobility scooter users as well as cyclists of all ages.

The crossing point is on the off-road cycle route between Riverfield Drive and Newnham Avenue.  Several years ago the junction was to be signalled with a pedestrian/cycle crossing phase included on Barkers Lane to improve safety. The scheme had to be abandoned due to legal problems in acquiring  a slice of Goldington Green common land to enable the work to take place.

It was agreed that a safe crossing at this point for vulnerable people would be a priority of any future scheme and has been one of the actions included in the Borough’s Local Plan documents since that time.

A safe crossing has not been installed in this latest scheme due to claimed budget shortage even though the press release stated that improvements at Barkers Lane had been made for pedestrians and cyclists.