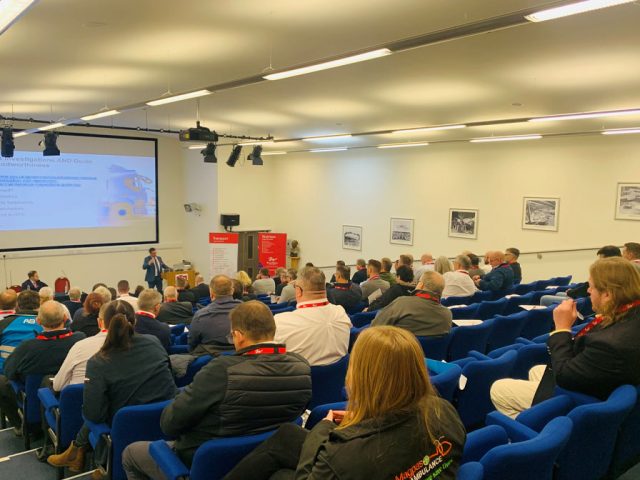 The Woodfines Solicitors Road Transport team were delighted to host their 16th Transport Conference at the Imperial War Museum Duxford on Thursday 25 November.

With it being two years since the last face-to-face conference, the team were thrilled to be back ‘talking transport’ in person and celebrating the industry that has ‘kept the show on the road’ during the pandemic.

The conference was opened and hosted by Partner and Head of the Transport and Regulatory team, Mike Hayward who gave a legal round-up and update of what has happened since everyone last met, as well as recognising the logistics industry as the lifeblood of everything we do.

Mike handed over to Damian and Justyna Sodel, owners and founders of NN1 Personnel who spoke of their experiences with driver recruitment and also the fact that quite shockingly, a HGV driver is not listed as an eligible occupation to apply for a Skilled Worker Visa.

Keeping to the theme of drivers, Ruth Edwards, Operations Director at Talent in Logistics/RTITB and ambassador for the logistics industry looked further into the issue, and more specifically at the importance of driver engagement and retention.

Woodfines’ Nathan Taylor-Allkins then delivered an interactive session that involved delegates voting in live polls, adding some fun, whilst still being informative. Do you know your Belgium roundabout from a Dutch one?

After a quick refreshment break to refuel, the delegation enjoyed a presentation from Mark Cartwright, Head of Commercial Vehicle Incident Prevention at National Highways, who delivered a strong presentation reminding delegates of the importance of load security and post-crash support, as well as sharing some rather shocking stories of what they have seen out of the roads.

Woodfines’ Head of Corporate and Commercial, Maria Gallucci then took the wheel to discuss employee status and the importance of getting this right.

Barrister, Kim Preston of 4 Kings Bench Walk who Woodfines have a strong and longstanding relationship with, took to the lectern to deliver an important and informative presentation with added humour about health and safety in the logistics workplace, and what happens when the wheels (quite literally in some cases) fall off.

After a jam-packed morning, everyone had worked up an appetite, and after lunch were able to pop outside to have a chat with Traffic Officers from Leicestershire Police who, together with one of their undercover HGVs, were there for the day to discuss first-hand experiences and concerns from out on the road.

The lorry was certainly a big hit with delegates and some of the Woodfines team who were lucky enough to get in and take a closer look.

After the excitement of the lorry, it was time to get back to business and hear from Phil Breen, Head of Earned Recognition at the DVSA and regular speaker at Woodfines Conferences.

Phil gave an update on Earned Recognition, as well as sharing some case studies from operators and members of the scheme to demonstrate the positive impact it has had on their business.

Last but by no means least, Woodfines Solicitor Jane Anderson gave a very topical update on the tightening of rules around the use of mobile phones whilst driving, an important issue which has been spoken about at conferences on several occasions and one which the officers reported seeing all too often out on the roads.

The transport team then ended the day by taking questions from the delegates before closing in the usual Woodfines way of a Champagne business card draw.

Mike Hayward, Head of the Transport team said: “With it being such a long time since we last met, it was fantastic to bring everybody together and celebrate the logistics industry who have worked so hard during the pandemic to keep things moving.

“Thank you to all of my team, the guest speakers and everyone who took the time out to join us during this difficult and busy time and make the day such a success.”

The team would also like to thank all of their transport contacts who were unable to make it on the day for their continued support.

Woodfines offer full legal services with teams who are here for all of your personal and business legal needs.

The next conference will be taking place in May 2022 and should you wish to be added to our mailing list to hear more information in due course, please contact Kerry Ransby at kransby@woodfines.co.uk.