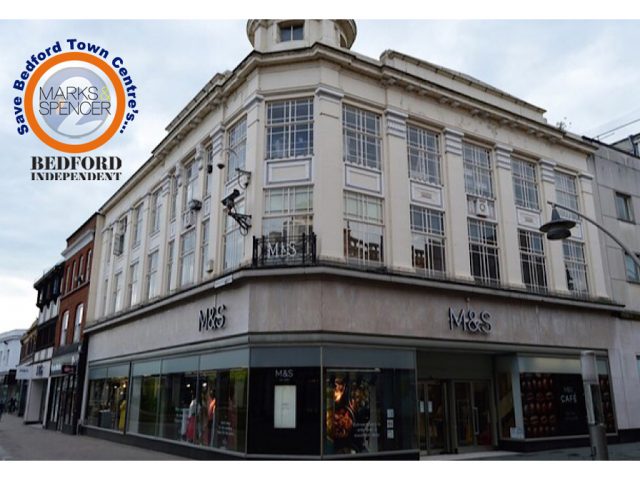 People have taken to the streets to show their support for Bedford Town Centre’s Marks & Spencer, with the Bedford Independent backed community-led campaign hearing directly from Bedford shoppers on why they think M&S must have a permanent home in the town.

Bedfordian, Helen Patterson has set up the ‘Save Our M&S – Bedford’ campaign to ‘put the spark back into Marks’ after hearing the store had been earmarked for closure.

Helen believes that simply signing a petition won’t be enough and instead also seeks feedback that M&S can use to help future-proof their Bedford Town Centre store.

“We spent the weekend speaking to shoppers in Bedford Town Centre not just about why they love M&S already but how they might love it even more.” Said Helen.

“M&S need to hear genuine feedback from their shopper directly and see what they’ll be missing out on if they turn their back on Bedford.”

Helen will now be collating all the feedback the team behind the campaign have received this weekend and via their Facebook page, and creating a letter on behalf of the town.

If you want to give feedback to Helen and the campaign team directly, they’ll also be outside M&S on Midland Road and Harpur Street on Wednesday morning from 10am.

What are the facts?

As with any event like this there will be rumour about what is happening and what people need to do.

The Bedford Independent has investigated those rumours and spoken at length with M&S about how shoppers can take part in the consultation.

How can shoppers take part in the consultation?

Despite what has been reported elsewhere, the best way to get feedback to M&S is to take part in community-led campaigns like the one set up by Helen Patterson, who can collate all responses together.

If shoppers want to comment individually, however, the best (and easiest) way to give feedback is to email their thoughts to chairman@marks-and-spencer.com or call the M&S Executive Team: 0333 014 8440.

Is the store definitely closing?

No. The store has been earmarked for closure but there have been no firm decisions made yet. M&S say they want to speak to the 68 staff members who will be affected first and listen to shopper feedback first before making a decision.

When will the consultation end?

Here’s where M&S seemed to become a little secretive. When asked when a decision would be made, they didn’t know and suggested the consultation would take as long as it takes.

When pressed for a firmer answer and was suggested that a consultation can’t be indefinite, they simply replied that they didn’t know if a date for a decision has been agreed.

The Bedford Independent therefore advises that Bedfordians who want to share their support for Bedford Town Centre’s Marks & Spencer store do so via the details above ASAP.

Will M&S bosses be speaking to Bedford’s political and business leaders face-to-face?

While no one has a direct link to the M&S board and there have been no firm meetings planned yet, M&S say they welcome feedback from everyone and will seek to discuss ideas with as many people as possible.

This may be face-to-face but meetings like that have yet to be arranged.

There were reports that Bedford Town Centre’s M&S did really well over Christmas why are they now saying it’s not profitable?

M&S say they’re not able to discuss the full commercial details of individual stores. But we believe the reports about how well our town’s M&S did over Christmas need to be applauded and celebrated so do use them in your feedback via the details above.

M&S are currently looking into other questions we have put to them and we’ll report on these when they respond.

In the meantime, keep reading the Bedford Independent for the facts surrounding this consultation into the proposed closure of Bedford Town Centre’s Marks and Spencer and the progress of the ‘Save Our M&S – Bedford’ campaign.