Three organisations in Bedford were thrust into the spotlight on International Women’s Day (IWD) (8 March) but not necessarily for the right reason.

The Twitter account was set up Francesca Lawson and her partner, Alistair to draw attention to businesses and organisations using IWD as a marketing platform rather than to make a meaningful difference.

“We came up with the idea [the week before IWD] after seeing a few companies start promoting special offers and new products for IWD,” Francesca told the Bedford Independent.

“We built the bot and set up the account over the weekend before and launched at 7am on 8 March.

“International Women’s Day, Pride, and Black Lives Matter are primarily about raising awareness of, and taking action against inequality, yet a lot of companies see it as a marketing opportunity.

Francesca and Alistair created the app to remind employers and the public that there is still work to do, and that these supportive posts are meaningless unless they’re backed up with action.

The gender pay gap data for companies with over 250 employees is public information, which makes it easy to debunk corporate accounts’ International Women’s Day claims.

The bot RT’d 771 organisations throughout the day on 8 March, and just 9% of those had a gender pay gap in favour of women.

Bedford resident, Kirsty Lister, shared a @paygapapp screenshot from Twitter, highlighting the gender pay gap at Cranfield University, on the We Are Bedford Facebook page.

“I’m a proud Bedfordian and thought it would be of interest to many others here to have a little insight into how Bedford is fairing with the problem of the gender pay gap,” she told the Bedford Independent.

“When I raised it on Facebook, as a springboard for encouraging positive change, virtually all the responses were either denying that there is a gender pay gap at all, or demanding to know when international men’s day was. And then my post was reported as Fake News.

“All this, to me, only reinforces that as a society, we still have so much to do to ensure that all people are treated with equality.”

Bedfordshire Police was revealed by @paygapapp to have a gender pay gap of 10.3% and told the Bedford Independent that female representation in the force is above the national average for England and Wales.

“We continue to strive to enhance the number of female officers and staff,” said assistant chief officer, Phil Wells. “We have already introduced various gender-specific processes to assist with this journey.

“Whilst the force continues to recruit and promote females into all ranks and grades, we acknowledge the number of men currently occupying the highest-paid roles does affect the pay gap, and we have already made some progress with the Force Executive Board (the force’s senior management board) being comprised of 13 Bedfordshire officers and staff of which five are female.”

Cranfield University had the largest gender pay gap of all three organisations, and in response to being RT’d by @paygapapp, removed their original IWD message.< 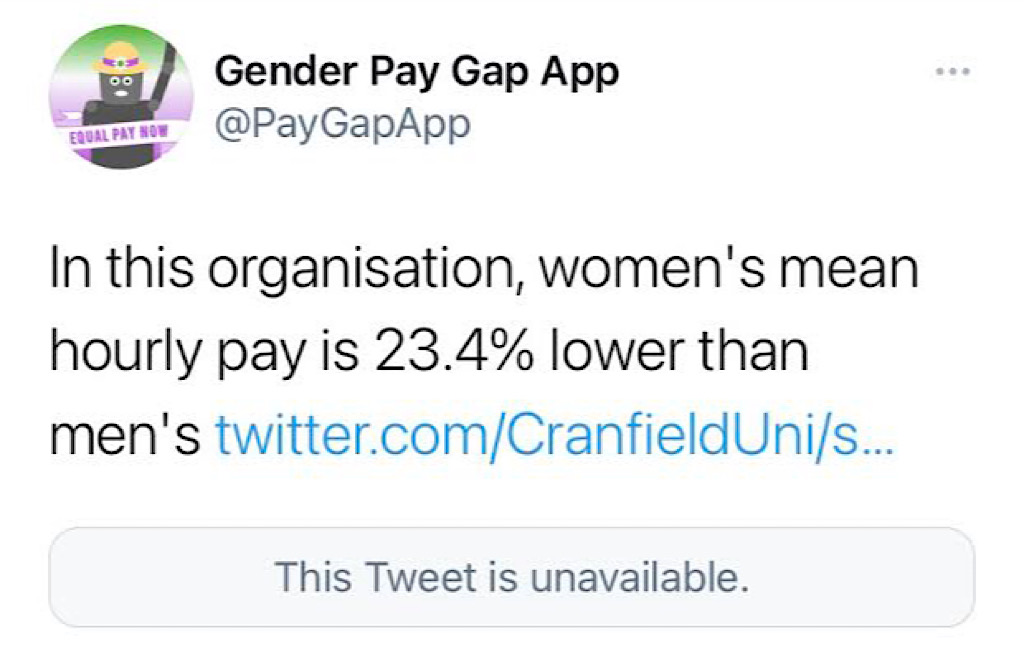 A Cranfield University spokesperson said: “Equality, diversity and inclusion is a priority for the University.

“While we recognise that we have much work to do, we are pleased to see our gender pay gap narrow and believe the positive steps we have taken will help us continue to redress this imbalance in future reporting years.”

The university has been awarded the Athena Swan Bronze Award which encourages and recognises commitment to advancing gender equality in higher education. 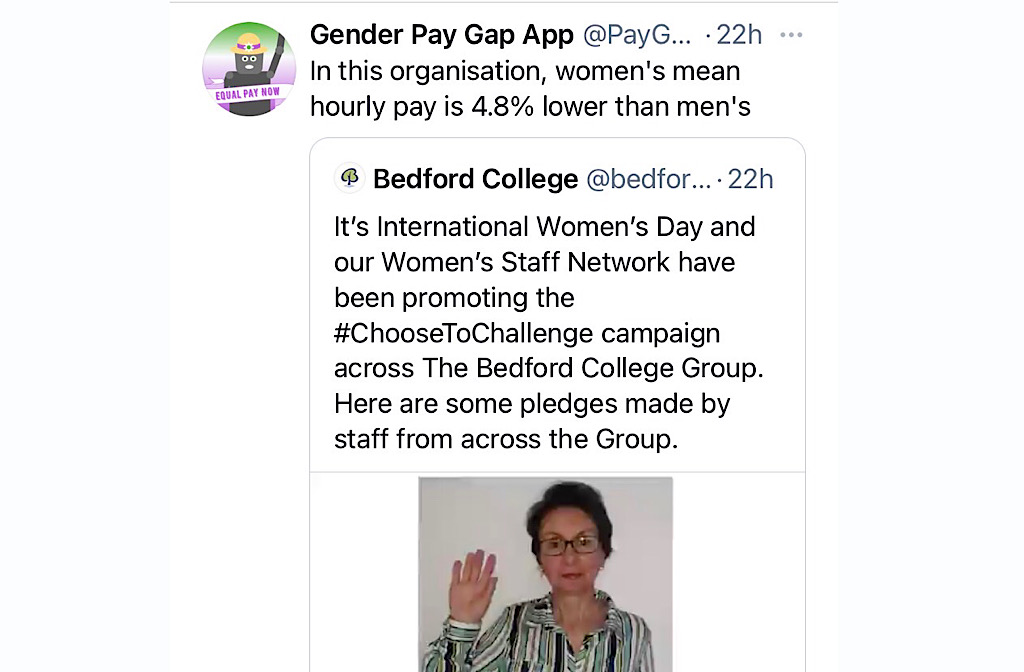 Bedford College was revealed to have a 4.8% gender pay gap, but told the Bedford Independent that their own equality and diversity measures show that women in all roles are paid equally with others in equivalent roles.

“The snapshot from Pay Gap is quite unrepresentative of the reality of life here at The Bedford College Group which champions equality among staff and supports educational opportunities for young women aged 16 and over so they, in turn, can follow the pathways of the most advantageous employment opportunities.”

Said Francesca: “Compulsory gender pay gap reporting helps us find out where those inequalities are, but it doesn’t force organisations to address their pay gaps.

“We can’t let companies get complacent – to reduce and close the gender pay gap we need to keep talking about it and keep pushing for change.”

As a member of the public, we can hold companies to account, particularly organisations that are using a cause to engage their audience or promote their products.

“What the Twitter postings highlighted for me was how much we are sold platitudes, which we basically believe at face value – because why shouldn’t we trust what we are being told,” said Kirsty Lister.

“I was heartened to see that some businesses felt that they would ‘own’ the data that was highlighted, hopefully in the sense that they were already aware of the statistics and were using it as a starting place to make improvements from.

“Other businesses deleted their original posts and reposted, which looks to me like they are just burying their heads in the sand.”