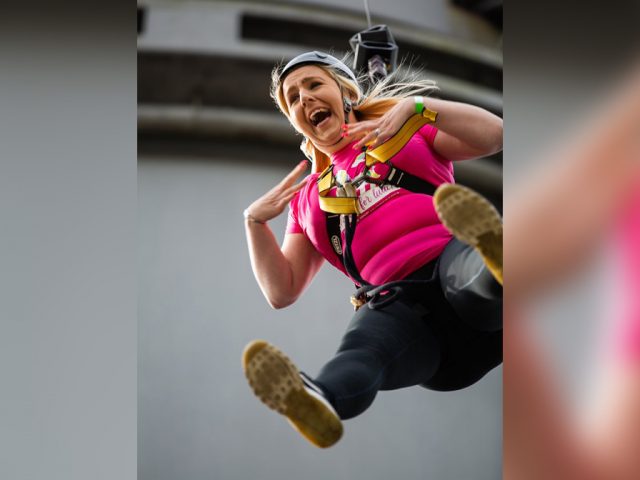 Some might call them crazy but by jumping off a 125ft platform on Sunday (22 May), 75 people aged 6 to 60 helped raise over £16,000 to help Lulu De Vries receive lifesaving cancer treatment in New York.

The 5-year-old from Great Denham has Neuroblastoma and needs the treatment in New York to help significantly reduce her chances of relapse.

The Leap for Lulu event was organised by Mel Stratton and Sophie Louise, with support from Lulu’s family and the team at Twinwood’s Adventure who hosted the event.

Mel Stratton said: “I cannot tell you how grateful the Leap for Lulu team are for all the support we received at the event.

“From all the fabulous jumpers who took part, to those who volunteered their time and services to support us and to the local business’ and general public who came along.

“Thanks to the team at Twinwoods Adventure for all your help and support in organising today and to my right hand woman Sophie Louise for being so fabulous. We cannot thank you all enough.

What a fabulous job you have all done in getting Lulu one step closer to her target figure to ensure she gets the much needed treatment she needs in the US. Thank you again.”

Each person had to raise a minimum of £100 in sponsorship to take part, with some raising considerably more. One individual, Neera Regmi raised over £2000!

Lulu needs £162,000 to access the revolutionary treatment in New York and is just £10,000 away from her target. If you’d like to donate, head to the Lulu’s Appeal Just Giving page.

Singer- Songwriter Tom Grennan, also took part in the leap and hung around to help support the day.

He said: “We’re all from Bedford, and I think it’s important to support local charity, and as a community, look at the turnout, it’s amazing.

“Lulu has won the hearts of all of us and we’ll do everything we can to get her to America.”

The jumpers, climbed ladders to reach the roof of the former RAE Bedford wind tunnel and were attached one by one to the  power fan descender, before stepped off into thin air.

Shortly after jumping, the system slowed the descent down so they all landed safely.

Although the activity is 100% safe, leapers still had to overcome every natural instinct telling them they shouldn’t be jumping into the void.

Some jumped straight off while others needed a little encouragement.

Paul and Erica from the Bedford Independent took part, along with Team BI kids Katie and Charlie.

Managing Editor, Paul Hutchinson, said “that was the scariest thing I’ve ever done”, he added “I very nearly bottled it but I’m so pleased I made the leap. I’d absolutely do it again.”

Alongside the jumping, a Family Fun Day was organised, keeping everyone entertained, with a petting zoo, face-painting, balloon modelling, cake sales, a bouncy castle, and lots more.