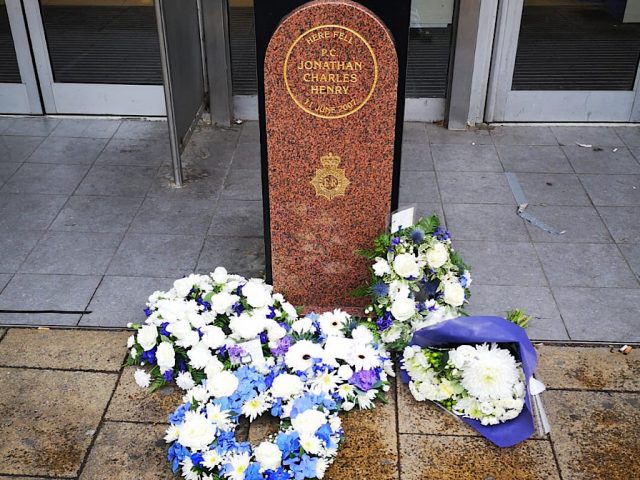 Thirteen years after his death, the bravery of a police officer who gave his life to protect others was remembered at memorial services today.

A service took place at Bedfordshire Police headquarters in Kempston and also at the spot in Luton where PC Henry was tragically killed.

A small number of officers and the family of late PC Jon Henry joined Chief Constable Garry Forsyth to mark the 13th anniversary of his death.

Flowers were laid in his memory at his memorial stone in George Street, Luton, before a minute’s silence was held.

Officers who served with PC Henry were invited to attend a separate service at police headquarters in Kempston.

CC Forsyth said, “Although 13 years have passed, PC Henry will always be remembered across the force for his bravery and his sacrifice, which is still felt among all ranks as we all work hard to protect the public on a daily basis.

“In the face of the challenges we are experiencing today, it’s important we all take the opportunity to reflect on his commitment to protecting others.

“PC Henry’s loss is also felt acutely by his family who are very much in our thoughts on this difficult day. Of course, many of our colleagues served with him and many of them have joined me and other members of the force today to pay our respects.

“PC Henry’s legacy is also remembered annually at the Force Annual Awards evening, where the PC Jon Henry Shield is awarded to an officer for their bravery. Unfortunately this year due to the Covid-19 pandemic, the force awards evening has been postponed, but PC Henry and his courage continue to be remembered across the force today and always.”

PC Henry, who left behind wife Mary and baby daughter Maggie, was an extremely effective police officer, who was popular and respected by his peers and seniors alike.

On 11 June 2007, PC 5584 Jon Henry was brutally murdered in Luton, while responding to a report of a man attacking members of the public with a knife.

PC Henry arrived as the first officer at the scene, placing himself between the suspect and members of the public to prevent further harm. He paid the ultimate price that day, when he was stabbed twice sustaining fatal wounds.

The force is also flying its flag at half-mast in his honour.