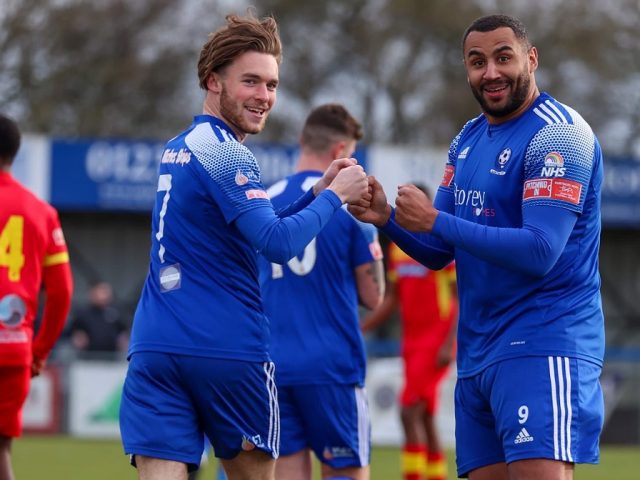 While last weekend’s 2-0 victory against title challengers Berkhamsted was a superb one, manager Gary Setchell would have wanted to back that up with a win today as Bedford Town hosted FC Romania.

With Berkhamsted travelling to lowly Hertford Town, eventually winning 2-1, it was key for Bedford Town to remain ahead with a confident performance.

While the Bedford Town players celebrated to the max last weekend, there were no signs of a hangover as the Eagles surged into a 3-0 lead inside 15 minutes.

With just seconds on the clock, Connor Tomlinson gave the Eagles the lead with a header at the far post before Bedford Town’s prolific striker, Rene Howe made it two from the penalty spot.

The game was almost done and dusted after five minutes, before Charley Sanders – who scored a piledriving effort last weekend to confirm the win against Berkhamsted – scored a third to all but end the affair.

A Zenon Stylianides penalty got a goal back for FC Romania to reduce the deficit to 3-1, but Bedford Town were never truly troubled.

The attendance at The Eyrie was 532, but they were in good voice as Bedford Town romped home to victory with ease, stamping their authority on the league table.

Sanders scored a second, making it three goals in two games to make it four before Connor Tomlinson also secured a brace late on to secure a dominant 5-1 victory for Bedford Town.

The comfortable victory maintains Bedford Town’s five point gap at the top, although Berkhamsted still do have a key game in hand.

It was of massive importance for a key win to be backed up, and the Eagles did not disappoint. FC Romania can prove to be a handful at their best, but Gary Setchell’s team didn’t show an ounce of complacency.

Next up, Bedford Town travel to Kidlington who are languishing towards the bottom of the table, but with eleven games to go, Town will be eager to keep the wins coming.

Across town, Kempston Rovers suffered the opposite fate, shipping five goals at home to Ware FC, who are fighting for a playoff place towards the top.

First half goals from Joshua Williams, Rechan Esprit and Leigh Rose within half an hour gave Ware control before a late second Rose goal and a fifth for Robbie Buchanan secured the thumping win.

Rovers may be a single place above the relegation zone but do have a ten point buffer as they travel to Harlow Town next weekend.