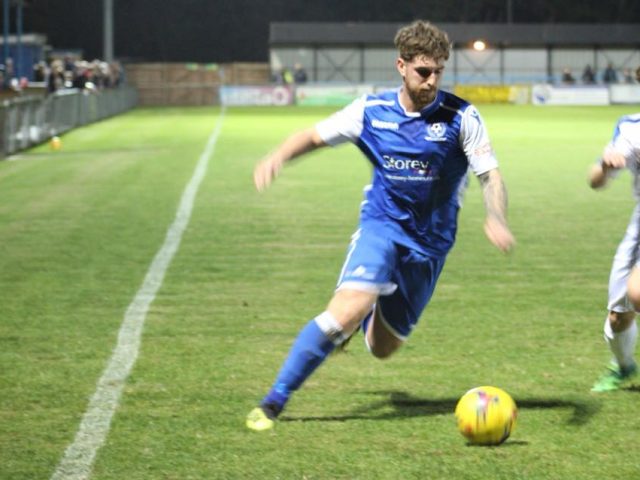 Bedford Town FC’s Manager, Jon Taylor, has praised the squad for recent fantastic league and cup results, adding The Eagles’ momentum can help the club fly to new heights – and he’s inviting everyone to come and watch for free.

The Eagles won 3-2 on penalties to beat Dunstable Town on Tuesday night in the Bedfordshire County Senior Cup. Momentum seems to continue to build after four consecutive wins in all competitions. “It was a great result on Tuesday night” said Jon Taylor “We rested some players, allowing time for the guys who are on the peripheries of the squad a chance to perform.

“The Beds Senior Cup is a nice competition to be in but first and foremost is the league. Currently in Evo-Stik League South, Step 4, this club has the aspirations to be in the league above (Southern League, Step 3) and feels like we should be there. We have strength and depth but its down to us, we know we must stay grounded and be consistent.”

A strong squad has propelled The Eagles to sit currently fifth in the league. The win on Tuesday means they are one-step away from the Quarter Finals of the Bedfordshire County Senior Cup.

Furthermore, Taylor’s men have qualified for the first Qualifying Round of the FA Trophy this Saturday away at Kingstonian F.C. “We made good signings this year and are looking at making another new signing soon in the midfield” adds Jon “Jermaine Osei (forward) was one of those new signings who has performed very well over the last month. He’s gone well in training and has scored four goals in the last two league games.

“Matty Harriot and Ashton Grant are two of the best midfielders in the league. Our captain Gavin Hoyte has given us great experience at the back. There’s a good balance in the squad, last year we played more as individuals, this year we seem more fluent in our passing with better build play and movement off the ball.”

Taylor hopes recent and, hopefully, future successes will get the Bedford community behind the historic, and currently, best football side in Bedfordshire. Jon says they’ve got what it takes to turn heads “The club is a sleeping giant and there is belief around the terraces. I will always give supporters after the game the time of day. They have been brilliant. We have been getting better crowds and the style of football we’ve got will hopefully attract even more to come and watch.

“We’d even go as far to say that if you want to come down for the first time then come for free. Hopefully you’ll then want to come back again!”

Reduction in disproportionate numbers targeted by ‘stop and search’

A cool 14 teams turn out for Bedford Hockey Club on...

Missing: Have you seen 15-year-old Denisa?

eCargo bikes ‘Keygo’ and ‘Greenwise’ a success in cutting carbon