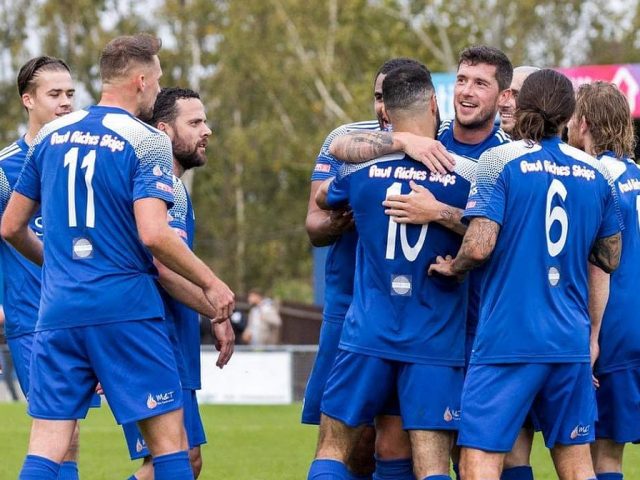 It was another busy week of non-league action in the Southern League for Bedford Town, as they kept hot on the tails of league leaders Berkhamsted at the weekend.

Gary Setchell’s side travelled to mid-table Didcot Town on Saturday afternoon looking to get back on the winning trail following a narrow 1-0 defeat at Berkhamsted just days before.

What transpired was as comfortable a win as you’ll see, as the Eagles dominated the game from first whistle to last, culminating in a 3-0 win for the away side.

Centre back Drew Richardson opened the scoring after twenty minutes and despite nearly conceding immediately, the rest of the first half was plain sailing for Bedford, in their changed white strip.

New signing Joe Butterworth, who has signed on a dual registration from Northern League side, Stamford, doubled Bedford Town’s lead on the stroke of half-time, giving the away side a two goal buffer.

Butterworth pounced on Rene Howe’s blocked strike to twist and turn in the area before shooting in off the post to get his debut goal for the Eagles.

Elsewhere, Kempston Rovers suffered another 6-1 defeat; this time at home to FC Romania who blew them away in the first half, strolling into the interval five goals to the good.

The defeat leaves the Walnuts in 17th place, four points above the relegation zone and a local derby trip to Bedford Town to come this weekend.

Gary Setchell has made no secret of the competition being low on the list of his priorities and may even be relieved to have been knocked out following a 2-0 defeat last night, with fixtures and injuries piling high.

A much-changed side battled bravely but two second half goals from Jack Stevens and Lewis Johnson sent the visitors through to round four.

Bedford Town are back in league action on Saturday afternoon as they welcome local rivals Kempston Rovers to The Eyrie.

The club are throwing their full weight behind the ongoing Rainbow Laces campaign, aiming to boost participation for LGBT+ people in football, as well as raise awareness on LGBT+ issues in sport.

That game kicks off at 3pm at The Eyrie with tickets still available to purchase here.