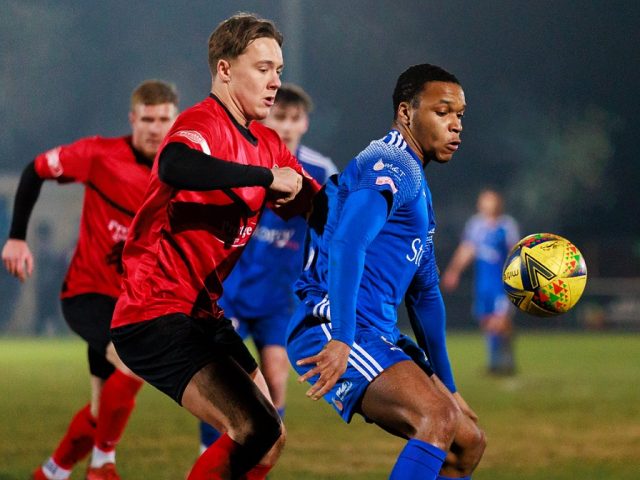 Bedford Town face a big week in the Southern League as they host chasing Berkhamsted at The Eyrie on Saturday afternoon in a bid to increase their lead at the top of the league table.

The two sides have been in imperious form in the last six weeks, opening up a large gap at the top of Central Division One, as the two teams look to fight for a single automatic promotion place.

The Eagles remain two points ahead of their Hertfordshire rivals, having played a game more but it could have been worse had they not made a characterful comeback at Thame United on Saturday.

Two goals either side of the half-time interval from David Pearce and Ryan Blake had looked to de-rail Bedford Town’s chances, only for Rory McAuley and Connor Tomlinson to hit back and secure a 2-2 draw.

Berkhamsted were facing FC Romania at the same time in a game of two halves; the second placed side racing into a 4-0 lead inside thirty five minutes.

FC Romania hit back with two goals before half-time, but were unable to complete their fightback in the second half as the game ended 4-2; Berkhamsted gaining two valuable points on Bedford.

Star striker should be fit after injury scare

Rene Howe, who has scored over twenty goals this season, was only fit enough for a place on the bench on Saturday after he sustained a minor calf injury early on in the Bedfordshire Senior Cup fixture against Barton in midweek.

The former Peterborough man was replaced by Craig Mackail-Smith after just five minutes, much to the anxiety of onlooking fans but made a return off the bench against Thame.

The cup competition – run by Bedfordshire FA – pits Bedfordshire’s top sides against each other; with a solitary goal from Dan Walker giving Bedford Town a passage through to the next round.

They go on to face Biggleswade Town, who play in the division above, with the game scheduled for 15th February at the Eyrie, although Luton Town are predictable favourites for the trophy.

However, all attention is now on Saturday’s crunch fixture where a win will give Gary Setchell’s side the advantage with twelve league games to go.

A Berkhamsted win will take them top of the league by a single point and with a game in hand, but the Eagles will be keen to avenge November’s slender 1-0 defeat to put them in the driving seat.

Tickets are still available for the game and can be purchased online at https://bedfordtownfc.ktckts.com/.