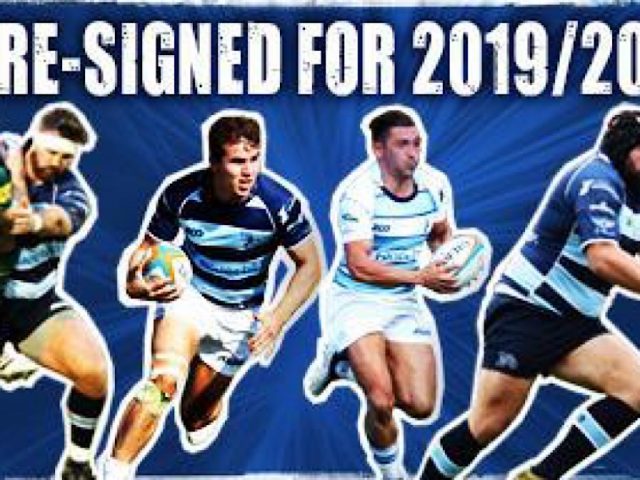 Bedford Blues have started the building process for the 2019/20 Championship season by agreeing new deals for four players from the current squad.

Props Alex Penny and Sean McCarthy have both put pen-to-paper on brand new contracts at Goldington Road as have winger Ryan Hutler and fullback Rich Lane.

Speaking about the new deals, Blues Director of Rugby Mike Rayer said: “There’s been a lot of work going behind the scenes in getting our retention and recruitment for next season and these four signings were and are very important to us.

“Alex and Sean have been immense in the front row and to have the cornerstone of our pack in place is really pleasing. Likewise, Rich has continued to show what an exceptional talent he is and he’s been pretty much the first name on the team-sheet all season long. As for Ryan? Well he’s blown everyone away this season and has developed so much both on and off the field and we’re delighted that he will continue to grow at Goldington Road.

“What has been really great is that these players want to stay at the club, contribute to an exciting brand of rugby and want to continue to develop. It’s great to have them on board once again.”

It has been a true breakthrough season for 21 year old Hutler who is another success story for the Blues Academy. After bursting onto the scene with an impressive hat-trick in the 2017 Mobbs Memorial game, Hutler continued his development with Bishop’s Stortford in National 2 (South) helping them to promotion to National One. Since stepping up to the Blues, Hutler has run in an impressive 12 Championship tries, including the opener against London Scottish at the weekend, as well as two in the Championship Cup.

Rich Lane has continued to live up to his ‘on fire’ reputation with another incredible season at Goldington Road. Having played predominantly at fullback this year, the 25 year old Bedford born player has been in sparkling form with many an attacking starting from one of his runs from deep. As solid in defence as he is in attack, Lane continues to be one of the first names on the Bedford Blues team sheet.

With 48 Blues appearances under his belt, Alex Penny has proven to be as solid as a rock in the Blues pack where he offers immense power and a deceptive turn of pace. The former Ealing and Henley man has truly settled into the culture at Bedford Blues and even found the scoring touch with two outstanding tries this season.

Completing the quartet of re-signings is 28-year-old Sean McCarthy who has been truly remarkable since signing for the Blues from Jersey Reds in 2017. Built like a centre, but with the power to strengthen any scrum, McCarthy has been a revelation since arriving at Goldington Road. Having represented Ireland Under 18s, McCarthy has also played for Worcester Warriors and Leinster before finding his home in Bedford.

The four are the first announced signings for the 2019/20 campaign with more to follow over the coming weeks.