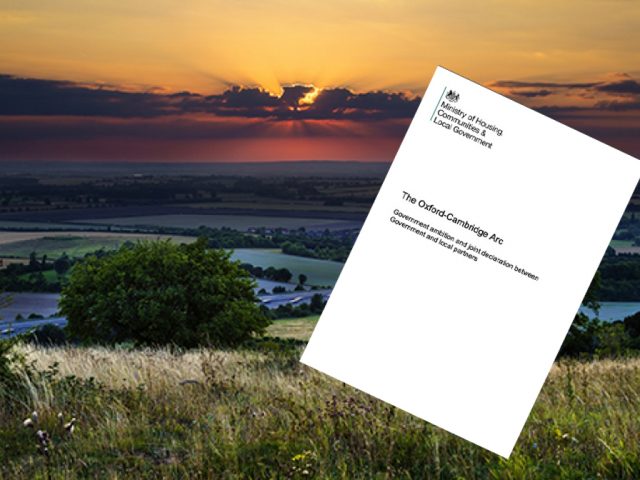 The Campaign to Protect Rural England (CPRE) says three quarters of Bedfordshire residents believe the Oxfordshire-Cambridgeshire Development Plan will destroy the local countryside and the environment.

A poll carried out our by research company Survation, on the behalf of the CPRE, showed that 75% of those asked were concerned about the impact of the development plan that could see one million houses in the region by 2050.

More worryingly, 67% of respondents said they hadn’t heard of the development plan or knew what it was.

Paul Miner, head of strategic plans and devolution at CPRE, is shocked at the findings: “It is unthinkable that the government would consider such a vast development proposal, which will have huge and damaging consequences for the countryside and environment, without any sort of assessment of its impact. People are right to be concerned.

“Before the government takes these proposals any further, it is imperative that a Strategic Environmental Assessment is carried out, along with a full public consultation on the proposals.”

In a statement, the Ministry of Housing, Communities and Local Government say: “The Oxford-Cambridge Arc presents an opportunity to put the government’s 25 Year Environment Plan into action, ensuring that development takes place in a sensitive manner, protecting and enhancing the Arc’s natural environment.”

With the Minister of State for Housing, Kit Malthouse MP, adding: “Handled sensitively the Oxford Cambridge arc can be an example to the world of how to both build large numbers of homes for a generation crying out for them, while also leaving the environment in a better state than we found it.

“This is the challenge and I hope that everyone will join us in rising to it.”

Meanwhile, CPRE Bedfordshire say they have repeatedly raised concerns about what they call a ‘democratic deficit’ due to the lack of public debate and consultation with these plans.

A spokesperson at CPRE Bedfordshire, said: “Many local and national politicians are hiding behind a network of bureaucracy and grand claims to push through a massive increase in development, at whatever the cost to the environment, and without any guarantee that local housing needs will be met.

“There is clear support for greater transparency on these decisions and we challenge our MPs to respond appropriately.”

The CPRE say that their analyses of the development plan, shows that to build one million new houses an area of countryside greater than the size of Birmingham would be lost to development.

The CPRE have added their criticism of the government for given the project its backing: “without a formal public consultation, or properly looking at how it will affect the countryside, people’s health, and climate change.”

However, the CPRE do concede that there is support for some new housing across the Arc but maintain that the majority of Bedfordshire residents do not support the scale of house building proposed.

However, three quarters of respondents of the poll did say that if any development does take place, the housing needs of local people must take priority and more social housing is what the area needs.

CPRE projections, however, suggest that the current plan will only provide for no more than 18% of the identified need for affordable homes locally.

A CPRE spokesperson added: “Without a formal public consultation and an environmental assessment, the impact of the government’s ‘growth at all costs’ approach could have catastrophic consequences for the local countryside, wildlife and environment, to the detriment of local communities.”

Meanwhile, a spokesperson for the The Ministry of Housing, Communities and Local Government said: “We are committed to protecting and maximising opportunities to enhance our natural environment as we work in partnership with authorities between Oxford and Cambridge to plan much-needed, high quality homes.

“The Spring Statement announced £445 million from the Housing Infrastructure Fund (HIF) to unlock over 22,000 homes in the Oxford-Cambridge Arc.

“The Oxford-Cambridge Arc presents an opportunity to put the government’s 25 Year Environment Plan into action by ensuring that development takes place in a sensitive manner, protecting and enhancing the Arc’s natural environment.

“The Arc is one of the most productive and fastest growing areas in the UK. Milton Keynes has the highest productivity per worker, almost 25% higher than the national average outside of London.

“The Oxford-Cambridge Arc is already home to 3.7 million people and currently supports over 2 million jobs and contributes more than £110 billion of annual GVA to the UK economy.

“By working together, we have a once in a generation opportunity to strengthen rural economies, enhance the environment and benefit communities.