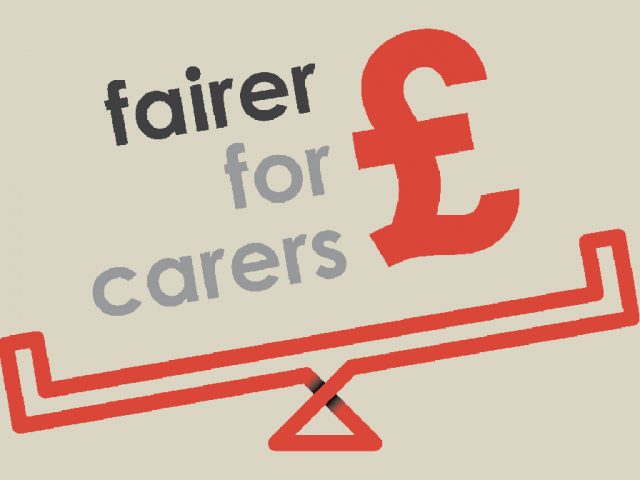 Local charity, Carers in Bedfordshire, has joined a national campaign asking the Government to address the financial hardship faced by many unpaid carers.

Fairer for Carers was launched yesterday (10 February) by Carers UK and calls for a £20 a week supplement to the Carer’s Allowance.

This would help carers manage the higher costs of caring and the lack of services available to help them stay in work.

At present, the Government is only pledging a 35p increase, in line with inflation (CPI). This will bring the weekly benefit for carers £67.60 a week by April.

“We are joining the campaign Fairer For Carers, as unpaid carers play a vital role in our society. We want to ensure carers are recognised for their huge contribution,” said Harriet Opalinski, Carers in Bedfordshire Head of Operations.

“The vast majority of care for the elderly, disabled or those who have a long term health condition, is provided by family and friends.

“Social services and the NHS rely on the millions of unpaid carers, as without it they would simply collapse.

“It’s been calculated by Carers UK the essential support they have provided is £530m, with each day of the pandemic that passes.”

Carers in Bedfordshire say that a vast majority of care is unseen, with many carers carrying out more than 50 hours a week of unpaid care for loved ones at home.

“The Government need to give back to carers who do so much for others, often at the expense of their own health and wellbeing,” said Harriet.

Carers charities have also highlighted the impact the pandemic has had, with carers facing closures of local services and reduced support from social care.

Harriet says the lack of support is having a real impact.

“On top of being already frustrated, anxious or exhausted, the impact of coronavirus on carers’ lives is far-reaching, with many facing further difficulties,” she says.

There are an estimated 40,000 carers across Bedfordshire. Carers in Bedfordshire say they currently provide health and wellbeing support to around a fifth of them.

They aim to double this number over the next few years and are continuing to urge thousands of carers to access our support, with many not realising they’re carers and deserve support.

“They are just doing what they can for a relative or friend,” adds Harriett. “But if that person couldn’t cope without your support, you are a carer and we encourage you to sign up to our services.”

For further information about carers in Bedfordshire or to sign up for support visit carersinbeds.org.uk. You can also follow #FairerForCarers on social media.

Lateral flow testing introduced from 8 March for all school and...