MPs and school leaders in Bedford have welcomed the government’s dramatic U-turn on providing free school meals to vulnerable families during the school holidays.

The Prime Minister announced this afternoon (Tuesday) that the scheme would continue after schools break up in July following mounting pressure from Manchester United’s Marcus Rashford and the Opposition.

Just hours before Labour was due to force a vote on the issue in the House of Commons, the PM announced the new £120m “Covid summer food fund”.

Since Tuesday, the Man Utd and England striker has been tweeting about his own experiences of food poverty and raising the issue of the UK’s poorest families, who cannot afford to pay their water and electricity bills or put food on the table.

His tweets had gained traction, with a number of Conservative backbenchers urging the PM to rethink the government policy to stop free school meal vouchers at the end of the summer term.

At lunchtime today (Tuesday) the Prime Minister’s spokesperson confirmed the U-turn, leading Rashford to tweet, “I don’t even know what to say. Just look at what we can do when we come together, THIS is England in 2020” to his 2.8m Twitter followers. 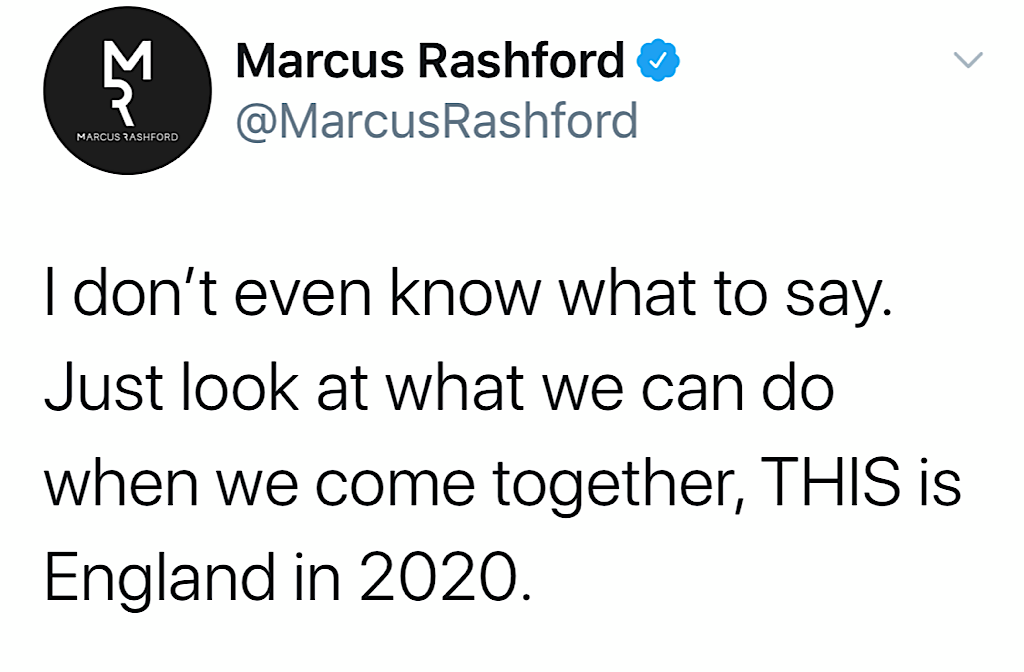 “Owing to the corona pandemic, the PM fully understands that children and parents face an entirely unprecedented situation over the summer,” said the Prime Minister’s spokesperson in the official announcement.

“The prime minister welcomes Marcus Rashford’s contribution to the debate around poverty, and respects the fact that he has been using his profile as a sportsman to highlight important issues.”

Families entitled to free school meals would receive a one-off voucher at the end of the school term, worth £15 a week for the six-week school break, which they can spend in supermarkets.

Speaking about the Government’s change of heart, Richard Fuller, MP for NE Beds said, “I think this is a very positive move by the Prime Minister. Families face many uncertainties as we re-open the economy with risks to jobs and incomes.

“Continuing this scheme through the summer holidays will take away one worry for many families.

“Mr Rashford has a record of working on food support programmes and wrote to MPs thoughtfully.

“His was not a standard celebrity endorsement without context and I was pleased to be one MP urging the PM to support this initiative through the Summer.”

Bedford and Kempston MP, Mohammad Yasin, said, “I am delighted that the Government has today announced a £120m Covid summer food fund, with Boris Johnson performing a significant U-turn following pressure from England striker Marcus Rashford and the Labour Party.

“During these entirely unprecedented times, it was extraordinary that Boris Johnson repeatedly rejected extending free school meals over the summer holidays.

“His U-turn means that the free school meals that are such an important lifeline for families struggling because of the current Covid-19 crisis will thankfully now continue.

“It is imperative that we continue to keep the pressure on, to ensure Boris Johnson keeps his word, and that the scheme is implemented efficiently and on time so that families continue get the help they need without interruption when the school holidays begin.”

Ruth Wilkes, Federation Principal, at Castle Newnham said, “‘As a school we have been delivering weekly meal packages to children in our community eligible for free school meals since lockdown began.

“This has not only provided essential nutritious meals for families to prepare together but also an opportunity to touch base with a member of the school staff.

“We were becoming increasingly worried about how families with already stretched budgets were going to manage during the six-week holiday and so we welcome the reversing of the decision today which now makes clear that families will be provided with vouchers to buy food.

“The crisis we’re living through has inevitably increased financial hardship and anxiety about work and making ends meet and at least this is one less worry for some of the families in our community.”