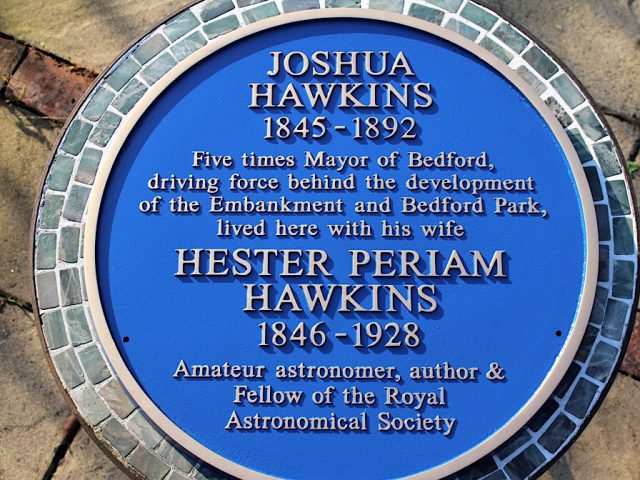 Joshua and Hester Hawkins – both extraordinary figures in Bedford’s history – have been recognised with the unveiling of a new plaque.

The fifth in a series of new blue plaques around the town, it’s situated on the wall of 18 Linden Road, the couple’s former address and now home to the YMCA.

To coincide with the unveiling, local historians, Stuart Antrobus and Mary McKeown, have curated an exhibition on the second floor of Bedford Central Library, running until Monday 29 April.

As five times mayor, businessman and editor of the Bedfordshire Times, Joshua Hawkins was pivotal in the provision of some of Bedford’s most recognisable landmarks including Bedford Park, the Embankment, County Bridge and the suspension bridge.

Also honoured on the plaque, Hester Hawkins was equally highly regarded in her capacity as a novelist, astronomer and hymn writer – the couple forming a formidable and impactful force.

Throughout 2019, five blue memorial wall plaques are being installed to honour these Bedford residents who made an impact on Bedford and the wider world.

The Blue Plaques are part of a £4k scheme which also includes two more information boards. This blue plaque project was devised by local historian David Fowler, assisted by Stuart Antrobus, and funded, amongst others, by The Harpur Trust and Bedford Architectural, Archaeological & Local History Society.