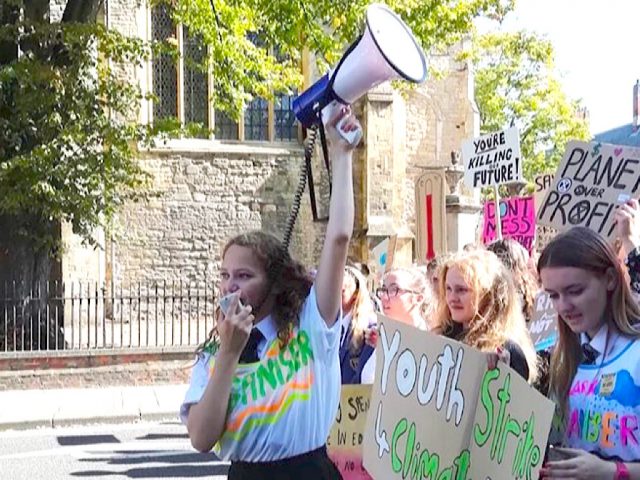 A number of Bedford’s prospective parliamentary candidates will be taking part in a Climate Hustings this Friday (29 November) as part of the Bedford Youth Strike for Climate.

Organised by Bedford Youth Strike For Climate, in collaboration with the Sustainability Forum at the University of Bedfordshire, the hustings will begin at 7pm and is open to the public and free to attend.

All of Bedford & Kempston’s parliamentary candidates have been invited and the following have confirmed they will attend: Charles Bunker (Brexit Party), Adrian Spurrell (Green), Henry Vann (Lib Dem) and Mohammad Yasin (Labour).

The hustings will give the candidates a change to discuss their parties’ policies on climate change and the environment ahead of the general election on Thursday 12 December.

Members of the audience are encouraged to put questions to the candidates.

Also on Friday, Bedford’s students and young people will be taking part in the global Strike 4 Climate.

“This is our third participation in the global Strike 4 Climate movement, and I hope to make this strike bigger and better,” said organiser, Elise Patterson.

“On 20 September we blocked the High Street and St Paul’s Square. This time we’ll be decorating the roads too and we will be making our mark in the heart of Bedford.

“We encourage all ages, genders and races to unite to fight the government’s inaction on the climate crisis this Friday in Harpur Square.

“The event will begin at 11am, lasting until approximately 3pm. During these 4 hours, we will be doing anything and everything we can in a non violent way to show the people in Bedford that we will not stand for the current ignorance towards the climate emergency.
“There will be speeches, marches and a road block. We will also be aiming to cover the ground of Harpur Square with chalkings, to show people that this isn’t something they can ignore.”
The hustings will take place at 7pm in Room G011, ground floor of the University’s Gateway Building, Polhill Avenue, Bedford.