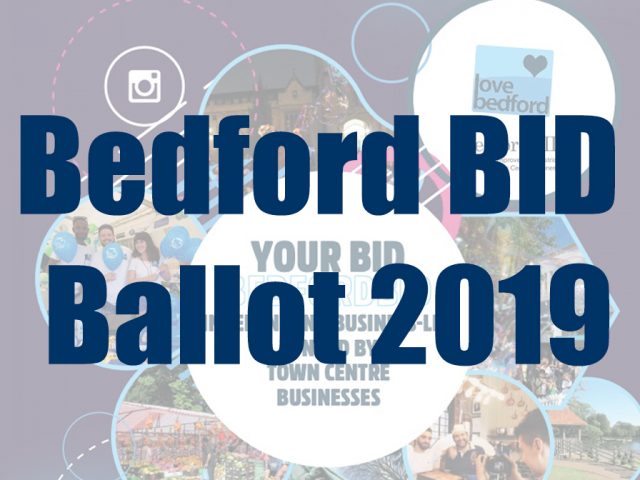 Thanks to a small group of local businesses including businesswoman, Nansi Rose, 140 small businesses previously denied a vote in this week’s Bedford Business Improvement District (BID) renewal ballot will be able to have their say.

And Nansi, owner of Roosters on St Cuthbert’s Street, is urging them to make sure they use it.

On Thursday 17 October, BedfordBID and its marketing brand, Love Bedford, will aim to enter its fourth term.

All businesses within the BID boundary are granted a vote to decide if they wish to pay 2% of the rateable value of their property to BedfordBID Ltd.

Find out more: What is a Business Improvement District?

Nansi Rose, owner of Roosters on St Cuthbert’s Street said, “In August this year I, along with 140 other small businesses in the town, received a letter from BedfordBID stating that when it is voted in for a fourth term (what do they know that we don’t!), we would be exempt from the BID levy as its threshold had been increased to all into line with Small Business Rates Relief.

“Whilst this could be seen as good news to some, I instinctively knew there was a catch.

“This was confirmed in a phone call to BID later that day when I asked “if I am exempt from the levy from 2020 onwards, can I still vote in the forthcoming ballot?” The answer was as I had expected – “no, I had lost my right to vote because it was an alteration ballot”.

“When I questioned this, BedfordBID and indeed the Chief Executive of British BIDs, Professor Christopher Turner, said, ‘I can’t see how you could object to losing your right to vote – you can now enjoy all the benefits of BID without having to pay the levy’.

“That is like telling people who earn below the income tax threshold that they can’t vote in the General Election.

“Surely, even though I won’t have to pay the levy next year, doesn’t mean I lose my right to have a say in how the town is run!”

Her argument was that the ballot was not an “alteration ballot” as claimed by Love Bedford but rather a “renewal ballot” and as such all businesses who currently pay the levy have the right to vote as stated in BID Regulations 2004.

The Council itself took legal advice and agreed with Nansi’s point and the ballot was re-named and ballot papers sent out to all of the smaller businesses who believed they had no opportunity to vote in the ballot.

The Council owns 27 separate properties which are eligible to vote in the ballot, including 10 car parks.

The Council’s votes alone make up well over 5% of all votes cast. There are over seven different rateable units within Borough Hall itself.

BedfordBID/Love Bedford represents over 600 levy-paying businesses in the town centre, however in 2015, the total number of votes cast in the ballot was 221, representing 37% of those eligible to vote.

Nansi said, “I am not against Love Bedford as a business in itself, but I know that all town centre businesses, big and small, are struggling in the present economic climate and therefore every single penny counts.

“I would rather have the BID levy in my bank account, it’s as simple as that. And as a local resident, I would rather that the Council keep its annual levy of £48,000 to contribute to the services it provides, which are already stretched to almost breaking point.

“That money could be used to employ front line staff in areas such as social care or education.

“Given how hard-fought our battle has been over the past few weeks, I would urge every single business within the BID boundary to exercise its vote in the forthcoming ballot.”

Director of Operations at Bedford BID, Christina Rowe said, “BedfordBID, like most BIDs, have lifted their thresholds to the level of the small business rate relief to match government support for small independent businesses as a way of helping them and responding to the consultation findings to continue to enjoy all the benefits of being part of a BID backed by larger businesses without any of the cost.

“All business were given the opportunity to provide their feedback as part of the consultation process.

“All business have received a copy of the proposal five year business plan and the BedfordBID Board continue to welcome applications from small businesses in the BID zone to join other independent businesses to the board of Directors.”

How the ballot works

All businesses with a rateable value over £8000 are now eligible to vote in the forthcoming ballot for a fourth term of Bedford BID/Love Bedford.

If the ballot is won by Love Bedford, small businesses with a rateable value under £12,000 will be exempt from the levy from April 2020 for the five-year term unless their rateable value increases to over £12,000 in 2022 when the new Rating List is published.

The ballot is a little like referendum in that there is a simple yes or no vote on the proposals made by Love Bedford.  However, that is where the similarity ends and aggregation begins.

To paraphrase George Orwell, as far as the ballot goes, all businesses are created equal but some are more equal than others….

Ballot papers must be received at Bedford Borough Council by 5pm on 17 October 2019 for your vote to be counted.

There will be a sealed ballot box located on reception at Borough Hall.

Eligible voting rate payers will be able to cast their vote into the ballot box between the hours of 8.30am – 5.00pm Monday – Friday and no later than 5pm on 17 October 2019.

The result will be announced on 18 October.

More details can be found at the Love Bedford website.