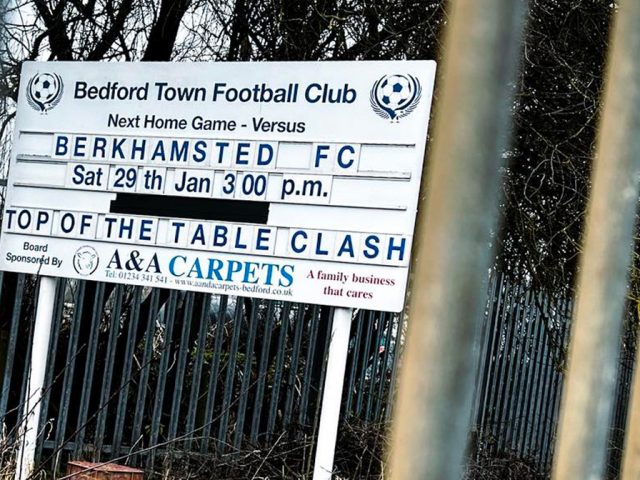 It looks set to be a nail-biting afternoon at the Eyrie this Saturday, as Bedford Town face Berkhamsted, with both teams vying for automatic promotion.

Back in December, Bedford Town welcomed 715 fans through the turnstiles for their derby with Kempston Rovers, but this weekend’s clash with Berkhamsted is already due to eclipse those supporter numbers.

With both sides in the running for just one automatic promotion place – and of course, the Southern League Central Division One title – this Saturday’s attendance is predicted to go above 1,000 for the first time in recent memory.

With no Premier League fixtures due to their winter break, Bedford Town have been on the campaign drive to get Bedfordians to The Eyrie to support their local non-league side instead.

In just 48 hours, we may be one step closer to knowing who is in the driving seat for the league title, but in the meantime, here is everything you need to know about the potentially season-defining game:

The fixture is a 3pm kick-off on Saturday 29 January at The Eyrie on Meadow Lane.

How to get there

There is limited parking at the Eyrie, so supporters are encouraged to share lifts if they’re driving.

Where are both teams in the league?

Bedford Town currently occupy the top spot in Southern League Central Division One by two points, but Berkhamsted in second place have a game in hand.

Southern League Central Division One is the 8th tier of English football, and while it may not be the dizzying heights of near neighbours Luton Town in the second-tier Championship, there are still some big names on show.

Who to watch out for

The star man for the Eagles is undoubtedly Rene Howe. The hometown Bedfordian has netted 22 goals in all competitions this season, and continues to be a threat to Southern League defences.

Howe’s involvement was in doubt after picking up a calf injury in last week’s Bedfordshire Senior Cup victory against Barton Rovers, but the 35-year old is in line to start against Berkhamsted after making a swift recovery.

Connor Tomlinson is also an attacking threat, contributing 12 of the Eagles’ 64 league goals so far this season, while Hugh Alban-Jones and goalkeeper Alex Street have also been in good form.

The Hertfordshire team has been a force to be reckoned with in this division for a few years now.

While Berkhamsted’s strike force may not be as potent as The Eagles’, their defence has been fearsome conceding just 14 goals to this point, although they do come off the back of scoring four first-half goals against FC Romania last weekend.

They also have the bragging rights, having beaten Bedford Town 1-0 in November at Broadwater while the two sides drew 1-1 in last season’s solitary encounter.

The season before, The Comrades pulled off the double, winning 4-0 at home before securing a 2-1 win at The Eyrie.

They will still be without Ben Walster (suspended) and Tommy Smith (broken nose) but otherwise, manager Chris Devane has a full-strength squad to choose from.

Devane, who has previously taken charge of Crawley Green in Step 5 and near neighbours, Biggleswade United has been in charge since June 2020.

Whatever the result, the occasion promises to be a big one, with the club hoping to welcome a record attendance for such a key game.

With twelve league games remaining after this one, this won’t be the be-all and end-all for either side but Saturday’s victor will take a big step to the hotly contested league title.

Tickets can still be purchased at the Bedford Town website here.