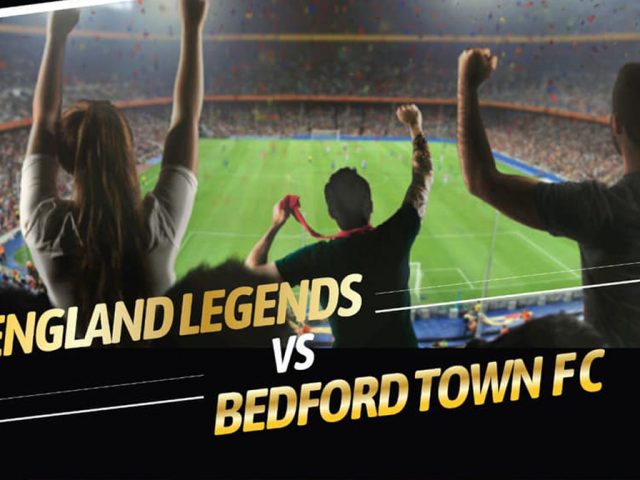 Bedford Town are due to host a series of England legends in a unique football match at the Bright Management Stadium on Sunday 27 October in aid of local charities and the community.

Other former players include Mark Wright, Des Walker and Rob Lee all of whom played for England during the 1990’s and Noel Whelan who turned out for a number of teams including Leeds United, Middlesborough and Coventry City.

The latest addition to the Legends squad is Kevin Phillips, the only Englishman ever to win the European Golden Shoe after scoring 30 Premier League goals in a single season for Sunderland.

The club are also celebrating other people who have made a great impact on British sport, such George Boateng and rugby stars Ben Cohen and Kyran Bracken.

Former Bedford Town defender Steve Jackman will be managing the Eagles team, along with Ady Hall, both assisting Nick Platenaur.

Speaking exclusively to Bedford Independent he said: “We saw in the summer the documentary Harry’s Heroes where ex professional players who hadn’t seen each other for a while met up.

“It showed the positive effect it had on the players mental state of mind. This is for a few hours on a Sunday afternoon but I hope everyone has a good time and positive experience as well.

“We have contacted about 60 ex Bedford Town players, some of whom are gutted they can’t be involved, but I’m convinced the squad of players Nick, Ady and myself have brought together will put on a performance fitting of the occasion, that will make the Eagles fans proud and bring the memories flooding back.

“I’m really looking forward to meeting up with players and fans, so I’ll see you there”

The Bedford Town Legends to face the Bright Legends are:

Bedfordshire Fire Service and the Community Cohesion team from Bedfordshire Police will be among those in attendance, with the added bonus of guest appearance from Chase, the community cohesion dog.

Tickets are on sale now via the club’s online ticket portal at https://bedfordtownfc.ktckts.com/ and cost £12 for adults and concessions, with a reduced rate of £6 for under 16’s.

There are also ticket packages on offer with a Platinum VIP package available for £50 and standard VIP tickets for £35, along with special child’s mascot packages for £30 allowing youngsters to get closer to the action.