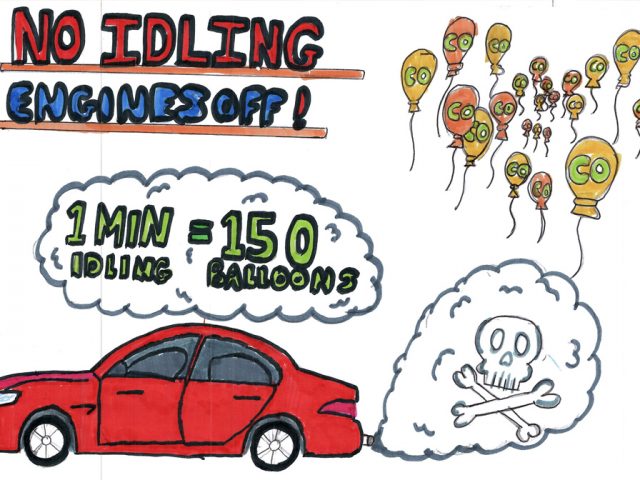 As part of a campaign to discourage drivers from idling, students from primary schools in the Borough have designed posters to make people to think twice about leaving their engines running.

It is part of a campaign by Bedford Borough Council to work alongside communities to raise awareness about the dangers of idling vehicles, especially for those who it impacts most including children, older people and those with a respiratory condition.

Idling is when an engine is left running while the vehicle it belongs to remains stationary. It reduces air quality by releasing a variety of harmful gasses into the environment and is particularly prevalent during the colder seasons, especially around school pick up and drop off times.

Because idling releases harmful substances into the air, it has been linked to health complications such as reduced lung functionality, heart diseases and asthma and other respiratory conditions. Many people also aren’t aware that the air inside an idling car can be twice as toxic as that outside of the vehicle.

Over the coming weeks, the Council will be out visiting primary schools alongside the Air Care Bear to talk to children and young people about the impacts of idling.

Green councillor Lucy Bywater told the Bedford Independent: “Before I was elected in 2019, Castle Ward residents were approaching me about problems with drivers idling and I was sharing information to support several local schools.

“I took the issue up with the council, and as a result, the council started producing its first  ‘no idling’ signs, which went up outside a school in Castle Ward.

“I’m delighted to see that the council has not stopped there, and is extending its campaign against this wasteful behaviour that makes our problems with air pollution worse for no good reason.”

Councillor Charles Royden, Portfolio Holder for Environment, said: “We want to make sure people have the facts on idling so that they understand the impact it can have.

“For example, there’s a popular misconception that turning off your engine consumes more fuel than leaving it running but in reality, if your vehicle is stationary for more than a few seconds, it’s better to turn of the engine.

“If the range of health complications that can be caused by idling weren’t enough to make you think twice, it’s also bad for your vehicle and regular idling can cause problems with your engine and exhaust.”