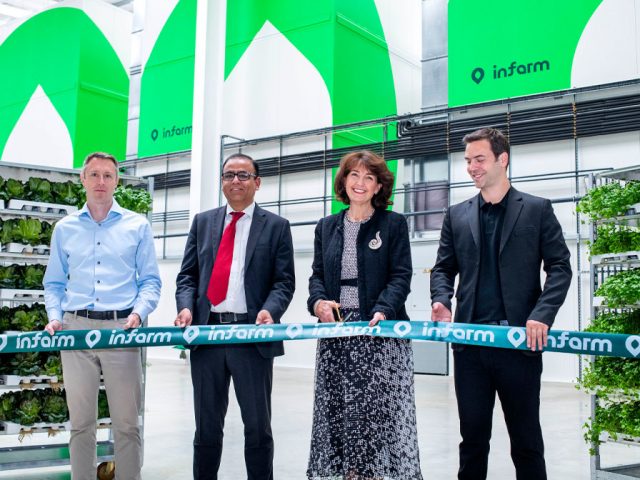 Technology and agricultural innovation is on the menu at a new urban farm that was officially opened in Bedford yesterday (Tuesday) by the minister for agri-innovation and climate adaption.

Jo Churchill MP – a former pupil at Dame Alice Harpur School in Bedford – was joined by Bedford and Kempston MP, Mohammad Yasin at the Infarm launch at the Elm Farm Industrial Estate.

The Bedford site is one of the largest vertical, urban farms in Europe and is the company’s first high-capacity Growing Centre in the UK.  The facility measures 10,000 sqm and has capacity for up to 40 Infarm cloud-connected farming units, each standing 10 metres high.

Each individual unit can grow more than 500,000 plants per year – the equivalent of a football field worth of crops.

Bedford was chosen as the location of the new facility as it is within the logistics ‘golden triangle’, meaning that 90% of the country’s population is within a four-hour drive.

In the UK, Infarm’s herbs and leafy greens are supplied to Whole Foods Market, Selfridges, Marks & Spencer, Fortnum & Mason, Budgens, as well as at the online retailer Getir.

In addition, Infarm’s fresh produce can be tasted at restaurants in London, including Michelin Star locations, Pied a Terre, Sabor and Hide.

Uniquely, the Growing Centre in Bedford will implement rainwater harvesting and they have also installed solar panels and are planning a wind turbine.

The Elm Farm facility is Infarm’s benchmark site across the whole company, leading the way in agricultural innovation.

Guests at the launch were invited to look inside one of the automated farming units to see the mechanism in action and were able to taste Infarm-grown wasabi and Peruvian mint, both grown for specific customers’ requirements.

Speaking at the launch, minister for agri-unnovation and climate adaptation, Jo Churchill, said: “Infarm is capable of producing up to 20 million plants across the UK every year, and its new facility in Bedford will be a fantastic boost for the local economy.

“With each unit having the potential to grow over 500,000 plants per year, Infarm is a great example of innovation being used to enhance productivity – and I am delighted to support the opening of this facility today.” 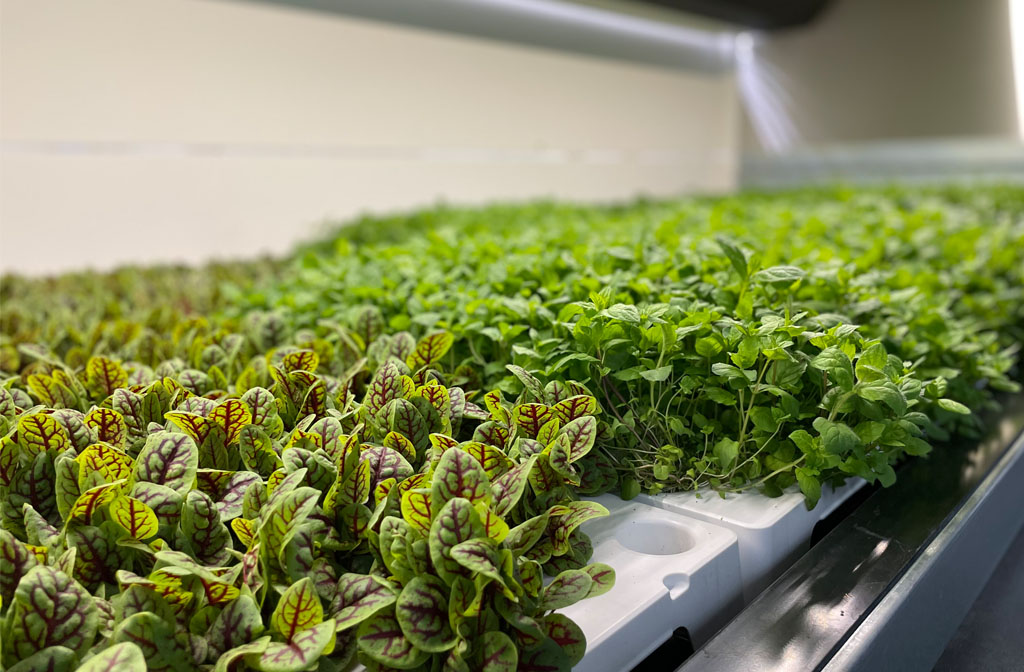 Mr Yasin MP said it was great that Bedford was able to play its part in bringing food closer to people, on a scale that could one day feed the entire country.

“The UK is overly dependent on food imports leaving us dangerously exposed to food insecurity and soaring food prices so I’m really excited that Bedford is now home to one of Europe’s largest vertical farming facilities,” he said.

“The prospect of growing food with a low carbon footprint, without the need for chemical pesticides, using the latest in green technologies is very promising.”

The tour of the site was led by CEO and co-founder of Infarm, Erez Galonska, who joined the MPs for the official ribbon-cutting ceremony.

“Fully equipped we will be able to deliver up to 20 million locally and freshly produced plants to our UK partners every year,” he said.

“We are grateful that our efforts to contribute to safe and sustainable food production in the UK are acknowledged and supported by Jo Churchill and Mohammad Yasin who we are honoured to welcome here in Bedford.”

The new Growing Centre in Bedford will be part of Infarm’s expanding global network of vertical farms. By the end of 2030, Infarm plans to expand to 20 countries. Every vertical farm is connected to a central farming brain which gathers data constantly to improve plant yield, taste, and nutritional value, while further reducing the use of natural resources.