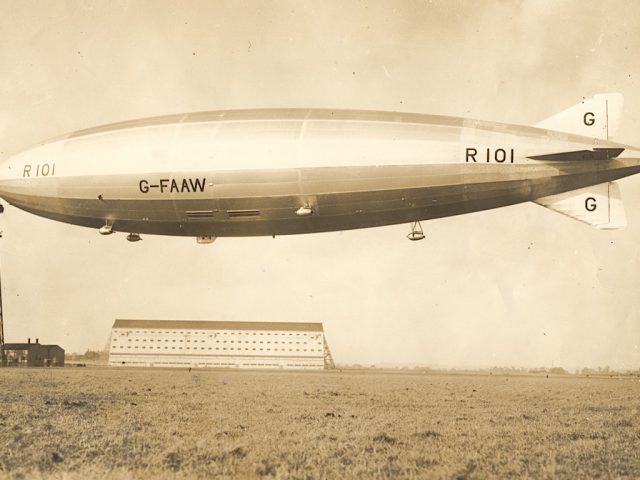 A history podcast, set up to alleviate the boredom of lockdown, has turned its attention to Bedford this week, to mark the 91st anniversary of the ill-fated maiden voyage of the R101 airship.

In the spotlight this week are the Cardington Sheds and Bedford’s role at the heart of the airship industry, both of which are explored at the Airship Dreams exhibition, currently at the Higgins.

And it is particularly poignant this week, as 4 October marked the 91st anniversary of the R101’s crash in France on its maiden voyage from Cardington, Bedfordshire for its intended destination of Karachi, India.

Artist, Mike Stubbs and the Higgins’ social historian, Lydia Saul, were both integral to the exhibition, and both of them have joined Chris and co-host Andy Lock, to discuss the significance of the Cardington Sheds and to commemorate the fatal maiden voyage of the R101 in October 1930.

“As a Londoner who moved to Bedford seven years ago, I instantly became interested in the town’s rich history, from the Viking invasion to its military heritage during the two World Wars,” explained Chris.

“I was very excited to learn that the Higgins Museum was curating an exhibition on the R101 airship. The exhibition gives a great insight into the local history and the people involved in working on this vast aviation project.

“I got in touch with Lydia Saul, keeper of social history at the museum and artist, Mike Stubbs, and invited them onto the podcast.

“I think anyone with an interest in local history or airships will find it fascinating.”

You can listen to the Remembering R101 episode of the History Hack podcast here.

The Airship Dreams exhibition is at the Higgins Bedford until March 2022. Mike Stubbs’ stunning, immersive art installation, Defying Gravity can be seen until 20 November 2021.

Entry is free, but you will need to book a timed entry ticket. For more information and to book, visit the Higgins website here.