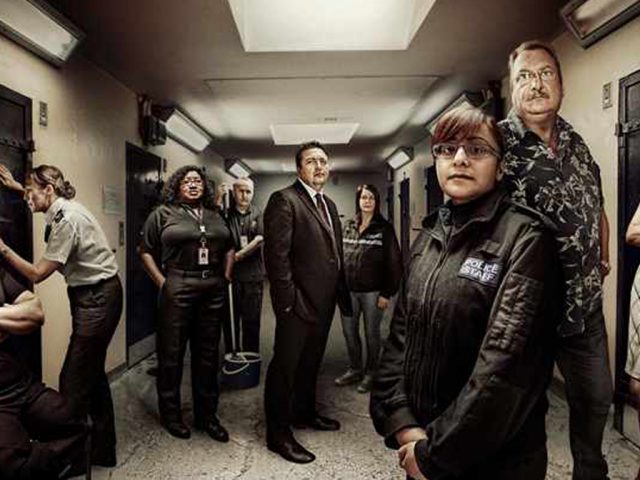 One of the most talked about episodes of ’24 Hours in Police Custody’ airs again tonight, and the lead officer in the case, detective constable (DC) Dave Brecknock, has spoken about the episode and the investigation.

The episode, dubbed ‘Fireplace Fraud’, follows Bedfordshire Police as they receive a 999 call from a country estate, reporting a burglary of antiques worth a quarter of a million pounds.

Veteran CID detective Dave Brecknock and his team feel that something about the case does not quite add up.

The man reporting the crime, Anthony McGrath, is an orthopaedic surgeon who seems very anxious to make an insurance claim on the stolen property.

“My initial thoughts were of disbelief and I doubted myself and the evidence I had uncovered,” says DC Brecknock.

“I made myself re-visit all the compelling facts I had found, put them to an evidential test and re-checked everything.

“As I moved towards the mortgage fraud aspect of the investigation it became clear that this man thought he was beyond reproach as a surgeon and his written falsehoods became more brazen as I progressed.

“He didn’t just inflate his earnings, he followed them with carefully planned ‘false emails’ in an attempt to back up his lies.”

The episode reveals that the investigating team were quick to realise something wasn’t quite right about the claim but needed the evidence to prove their suspicions.

“The 24 Hours in Police Custody programme unfortunately only showed a small part of what I went through to secure a conviction on a wholly dishonest man,” adds DC Brecknock.

“Not all insurance claims can be investigated to the extent of this. However, this was an investigation in to the staging of a false burglary and McGrath was found guilty of falsely reporting such.”

DC Brecknock has been a police officer for almost 30 years, and while he says very criminals don’t tend to surprise him these days, the suspect in this case was not your average criminal.

“Criminals do not generally surprise me as they are by definition criminals,” he says. “But a doctor and fellow of the Royal College of Surgeons planning such a detailed web of lies, forged documents and deceit has surprised me.

“How such a successful professional could have such a Jekyll and Hyde personality, I heard praise and disbelief from colleagues regarding such a kind, thoughtful and dedicated doctor and surgeon turn when he was actually revealed to be such a conniving and divisive criminal.

“‘Operation Foremark’ is one of the most spoken about cases I have ever completed in my almost 30 years of policing.

“Officers and staff within Bedfordshire and the surrounding counties have spoken about the case and shared their thoughts and comments with me.

“I have received emails and letters from as far afield as New York to New Zealand, and telephone calls from complete strangers on my office number congratulating me on such an amazing investigation.’

While some say they’ve found the brazen nature and sheer arrogance of the suspect ‘amusing’, DC Brecknock says this was far from a victimless crime.

He added: “I do not think the episode should be classed as amusing; interesting yes, but it must be pointed out that there have been others affected by Anthony McGrath’s actions and I do feel for his family.

“His actions will also affect all of ‘us’, the general public, paying for our home insurance etc.

“We will always be subject to policy increases as the companies build in to their premiums the cost of persons over doing their claim.

“In this case Mr McGrath could have benefitted to the tune of almost £200,000 from his insurance. Who picks up that shortfall for the insurance company – we all do.”

As was the lead on the investigation, which took almost four years to complete, DC Brecknock did have to complete most of the work, but he is quick to point out that the conviction itself would not have been possible without many different people playing a part.

“I needed the assistance of teams across the county and within Ireland to finalise the case, the officers and staff know who they are and should take credit for their efforts.

“The public witnesses who attended court during the four and a half month trial and the jury who stayed through the whole case need a mention.

“As does the counsel; Ms. Charlene Sumnall and Ms. Carolina Bracken acting on behalf of the CPS both completed an amazing amount of work to present this case to the jury.”

Anthony McGrath, 46, of Clarence Road, St Albans was found guilty of fraud by false representation and committing acts with intent to pervert the course of justice.

He was sentenced to eight years in prison at Luton Crown Court.

While, programmes like ’24 Hours in Police Custody’ send a strong message to anyone involved in crime that the police will not rest until they are brought to justice, DC Brecknock says the airing of this episode led to an unexpected update from a former criminal.

“I even received a letter from a career criminal who I convicted for armed robbery, once Britain’s most wanted man,” he said.

“He wrote a very moving letter to me explaining how he had turned his life around and was now a successful businessman and champion for voluntary youth work in his home county.”