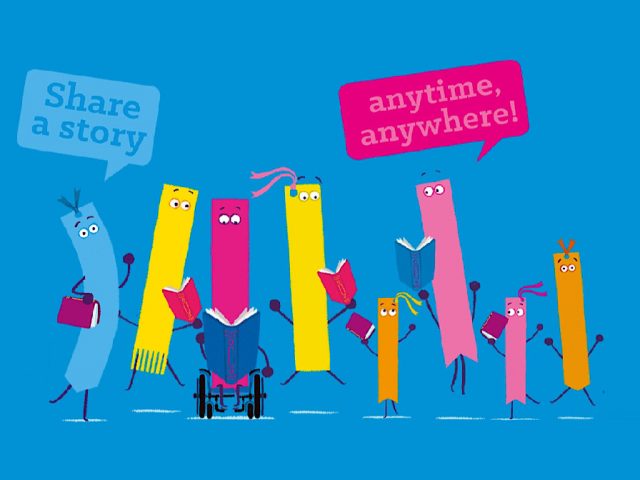 Bedford book blogger James Cross is passionate about getting children reading and sharing his love for books that might have slipped under the radar.

Ahead of World Book Day tomorrow (Thursday) we asked him to recommend books for all age groups. Over to you, James…

World Book Day was created as an initiative to get children into bookshops and in front of booksellers who could recommend the perfect book for them.

Bookshops take the £1 voucher given to all children and either offer money off a full price book or a selection of special shorter £1 World Book Day titles, out of their own pocket.

If we can, it’s really important to support local bookshops and those like Waterstones. Physical bookshops support your town centre and help children with real, in person advice, based on their taste and needs.

This year it’s much harder to get those recommendations, with the current health crisis keeping bookshops closed for browsing.

Indie bookshops all over the country are online and ready to help, and Waterstones in Bedford will reopen soon – but in the meantime here are my picks for some amazing releases out now! 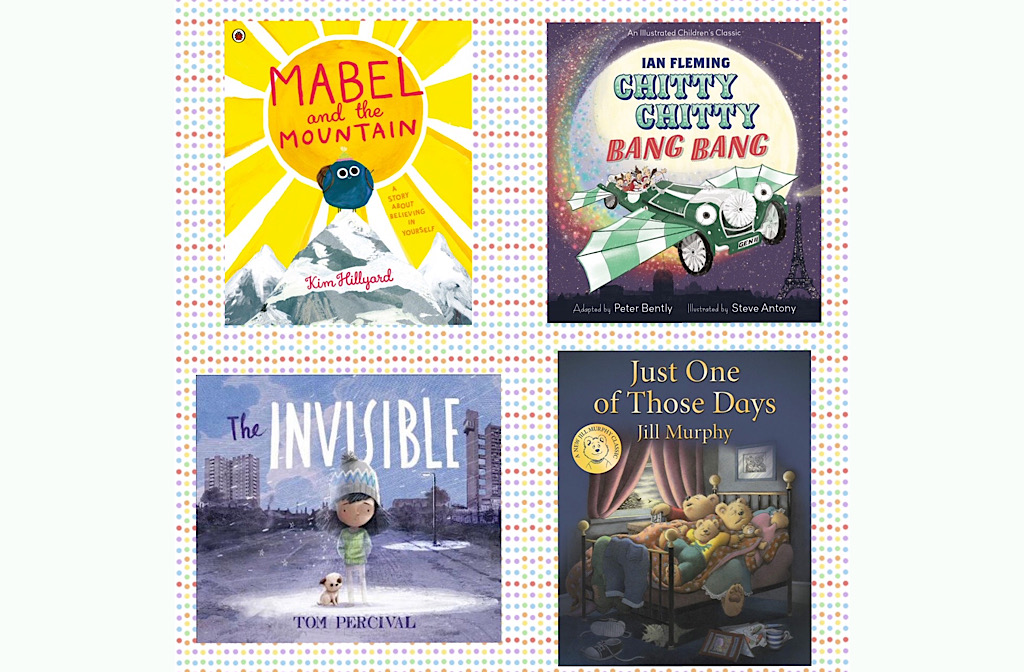 This is a real treat. Following the tone of the original book rather than the film, this is a throwback to how children’s books used to be, a fun adventure with beautifully painted art.
Read as Chitty becomes part of the family – and tackles a smuggler or two along the way!

Mabel and the Mountain
by Kim Hillyard

Mabel is a fly with BIG PLANS. Her friends and family tell her it’s silly for a fly to climb a mountain on foot, but she decides to go for it.

Beautiful bold art, a great message about facing challenges and a plucky little heroine being brave, what more do you want?

The Invisible
by Tom Percival

With this, he looks at child poverty. Isabel and her family don’t have a lot of money and can’t pay their bills so they have to move to a flat away from where she’s used to.

It’s a great way to show your child that not everyone has the same, or enough, and spark conversations about what we can all do.

Just One Of Those Days
by Jill Murphy

The third book featuring the Bear family 40 years after their 1980 debut Peace At Last.

The series continued in 1983 with Whatever Next! and in this one the Bear family navigate one of those days that has everything go wrong – with a nice surprise at the end.

A lovely way to introduce your children to a piece of your childhood.

Best for children aged 8 to 12 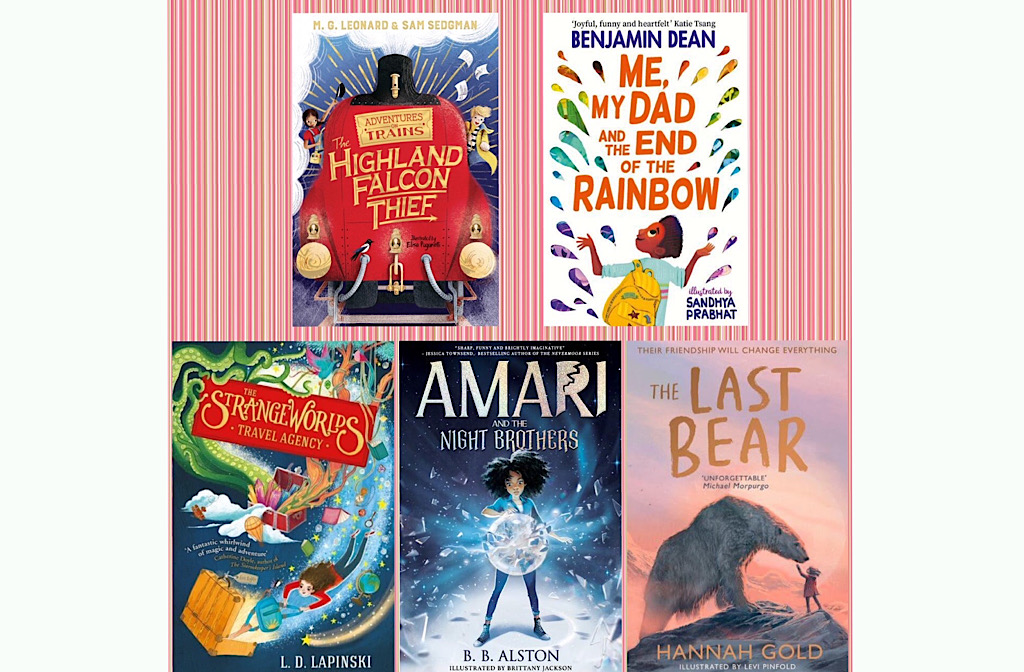 Adventures on Trains
by M.G. Leonard and Sam Sedgman

Starting with The Highland Falcon Thief these follow Hal and his Uncle Nat (a writer about trains) solving crimes and mysteries on journeys they take around the world.

A mix of Agatha Christie and the Famous Five – on trains, with some lovely pencil illustrations throughout. The third book was released last month and each just keeps upping the stakes!

Me, My Dad and the End of the Rainbow
by Benjamin Dean

This is a wonderful uplifting story about Archie and his parents who are going through a divorce and he doesn’t understand why.

Heartfelt and tender Archie gradually understands his Dad hasn’t been able to live as he has needed to – and when he finds a flyer for something called Pride he and his friends decide to go on an adventure to find out more.

A brilliant look at father-son relationships, a rare example of a children’s book with a lead Black family and a positive look at having LGBTQ+ parents and the history and spirit of Pride.

This is a really special read for broadening a child’s horizons – for fans of Onjali Q. Raúf, this fits perfectly as LGBT History month in the UK and Black History Month in the US both come to a close.

A brilliant new series about 12 year old Flick who finds a mysterious travel agency full of suitcases, each one leading to another world.

There’s a sinister plot taking magic from these worlds and Flick and her mentor Jonathan must act quickly to save another world from disappearing entirely.

From a bouncy low gravity world, one made of a forest of crystal trees and Five Lights a world like ours but where spells are cast all around you it’s a magical treat. The second book is released in April.

Amari and the Night Brothers
by B B Alston

America finally have their answer to Harry Potter!

Amari is looking to find out what happened to her older brother who disappeared. She finds a mysterious message from him that leads her to a magical summer school – but there is an old danger awakening that may give her clues on her search – but does she contain the very magic she’s fighting against?

The Last Bear
by Hannah Gold

This stunning book follows April – on a research trip with her dad to an Arctic Outpost – as she meets and befriends a polar bear.

A strong message about the environment, the power we have and friendship this is a lovely debut from Gold. 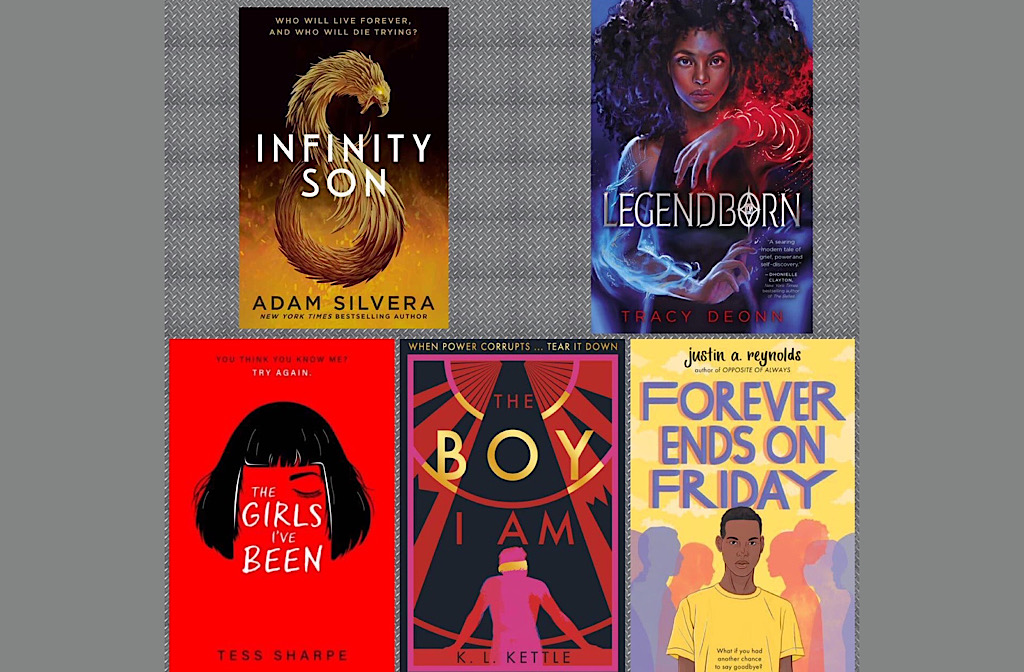 An urban fantasy story in a New York like ours except people have powers – one of the brothers is a YouTuber who is fascinated by them, but does he have powers of his own – and after a showdown in the city streets why are there bad guys after him?

The sequel, Infinity Reaper is released this week.

This is a present day story about Bree who is investigating a strange memory she has about her mother’s death.

She is at her mum’s old college when magic seems to find her. Full of secret societies, this is based around the theory that the powers of King Arthur and his knights are passed down the bloodlines.

She infiltrates these societies – it’s a brilliant myth retelling but also touches on her struggles as the only Black member this old, white, rich society has ever had.

The Girls I’ve Been
by Tess Sharpe

This is a thriller about Nora, the teenage daughter of a con artist, who faces her biggest test when she is taken hostage in a bank heist.

It’s twisty and turny but full of heart and emotions. There are discussions of past therapy and childhood trauma, but very well handled.

Millie Bobby Brown from Stranger Things is tipped to star in a Netflix adaptation.

The Boy I Am
by K.L. Kettle

I can sell this to you in one sentence: ‘Once a year the lucky young men in the House of Boys are sold to the female elite, if Jude fails to get selected at 17, he will be sent to live underground in the mines.’

A searing look at gender roles, a dystopian future, undercover hijinks and an assassination plot. Think reverse Handmaid’s Tale with a hint of Malorie Blackman.

Forever Ends on Friday
by Justin A. Reynolds

Jamal and Q were best friends until Jamal’s parents died and he blamed Q for it. After Q dies in a tragic accident, Q’s mother is offered a new technology that would bring him back to life for around a month before he dies again, for good.

An inventive exploration of grief and blame, and second chances, this is one to make you think.

All books are available through James’ Bookshop.org shop.  Bookshop.org is a site which gives independent bookshops a cut of the profits of all books they sell.