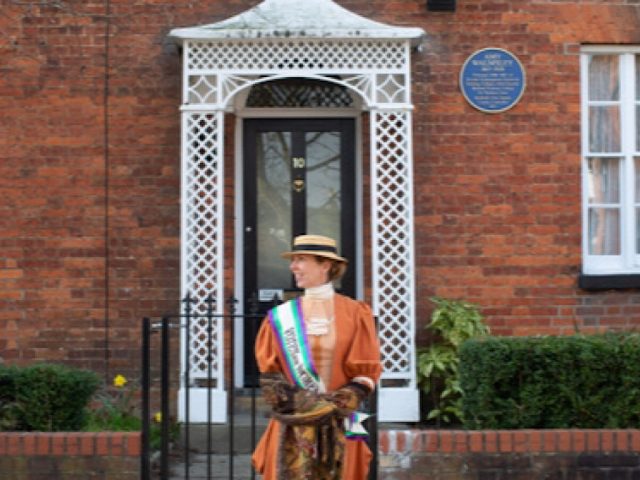 As part of their celebrations of International Women’s Day (8 March), Women of Bedford (WoB) teamed up with The Place Theatre to bring Amy Walmsley to life in the streets of Bedford.

Amy Walmsley was a Bedford educator, campaigner and suffragist who was born in 1868. Women of Bedford aim to erect the town’s first statue of a woman in Amy Walmsley’s honour and to generally highlight the under-representation of incredible women in Bedford’s history.

“With her caring nature, her advancement in teaching, and as an advocate for women’s rights, she embodied everything we take for granted in the modern world.

“The Women of Bedford chose her for the statue and over the next three years raised £15,000 towards the total costs of £100,000 for the project.”

Out and about with Amy Walmsley
1 of 7

Fundraising may have been temporarily paused due to the coronavirus pandemic, but raising awareness of the project and championing inspirational women in Bedford continues.

Which was one of the aims of taking ‘Amy’ on a tour of Bedford.

As part of the (socially distanced) tour Amy walked past 14 the Crescent, the site of the school where she was Principal for so many years and the building where a blue plaque was unveiled to her.

Artist Sara Sayer is selling limited edition prints of her drawing of 14 the Crescent to anyone who donates £20 to Women of Bedford (£10 will go to WoB and £10 will go to the artist) to get a copy of the print donate £20 here.

In collaboration with artists Emily Ross, Amina Paglieri, Katie Allen and Sara Sayer, WoB has issued a series of educational tools for parents, carers and schools to explore IWD with children.

In addition, a range of IWD book recommendations has been curated by Children’s BookFest and WoB founder, Rachael Rogan, which can be found on their Facebook page.

“There are 71 statues of women in the UK, of which 46 represent royalty. In contrast, there are 517 statues of men, 19 of which are royals,” said Rachael.

“Throughout history, and across the globe, women’s achievements have tended to be overlooked and undervalued, often written out of the history books. This sort of ‘everyday sexism’ means that women continue to fight inequalities to this day.”

The group continues to fundraise for Amy’s statue, but is expanding their programme to celebrate all Women of Bedford.

They intend to assemble an archive of original women’s stories, a place to identify and illuminate the women who have built and continue to build the town.

“These stories will rewrite the narrative, reminding us all of the fundamental role women play in making a town great,” said Rachael. “WE want ALL stories – inspirational women who have made an impact on the lives of Bedfordians, past and present.”

Ultimately, the Women of Bedford hope to inspire other communities to fight for diversity in representation.

As Rachael says, “Raising awareness of amazing historical women celebrates the pioneers of the past to inspire the future”.

Police appeal for information after woman was raped in Bedford

40,000 tulips burst into bloom in Bedford

Local children’s art brought to life in Mural of Joy in...