Public health chiefs in Bedford believe they will struggle to get covid safety messages across to the public in advance of Sunday’s football final.

A meeting yesterday (Thursday) heard that so far the defensive wall offered by vaccination is preventing an upsurge in deaths and people needing hospital treatment.

But the local outbreak engagement board was told that cases of the delta variant are surging upwards, especially in young, unvaccinated people. In the over 60s there has been a 420 per cent increase.

An exchange between Bedford borough mayor, Dave Hodgson, and public health chief Ian Brown revealed that the experts believe that it is about “harm reduction” rather than enforcement.

In advice in advance of Sunday’s England v Italy European Championship clash, Mr Brown said: “Please meet outdoors where possible. Enjoy it with your friends and family but if you can avoid crowds please do so.

“If you have to be in a crowd then please wear your face covering and try not to hug too many people.” 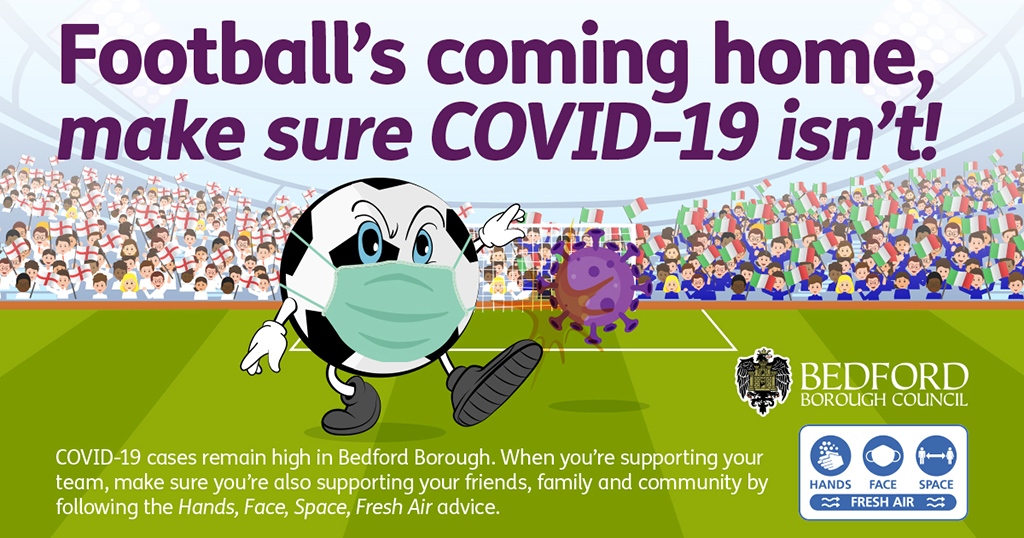 Mayor Hodgson said: “Try not to hug anybody unless they are in your family.”

Mr Brown added: “You are right. We shouldn’t be hugging anybody who’s not in our household but unfortunately, I suspect we may struggle to get that message across.

“It’s harm reduction where we can’t enforce it.”

Cases have increased by 79 per cent in a week overall and are currently sitting at more than 185 per 100,000 population. It’s set to double in the next nine days.

And the meeting heard it is only a matter of time before hospitalisations and deaths go up.

However, at the moment, the situation at Bedford Hospital is described as “stable” with seven covid-19 patients on the wards. There have been two recent deaths.

Mr Brown reported that the rise in infections is following the curve upwards from December and January. But he added that the predicted peak is “not clear when or if.”

Rises in case numbers are being seen across the borough, and not restricted to a few town-centre wards where surge testing temporarily held it back.

“At the moment I’m afraid we are being swept along in this latest wave,” he said.

With social distancing restrictions due to be removed on July 19, Mr Brown said it felt like it was going from “0 to 100mph” in one go.

Public health advice is shifting to trying to persuade people to make “more informed decisions” and think of those who are more vulnerable.

“We will be encouraging individuals and businesses to act in moderation and with caution,” he said.

Mr Brown added: “We will be encouraging people to be considerate and responsible in their use of face coverings.

Mayor Hodgson added that he would encourage fans to take a test before they go out to a pub or one of the venues.