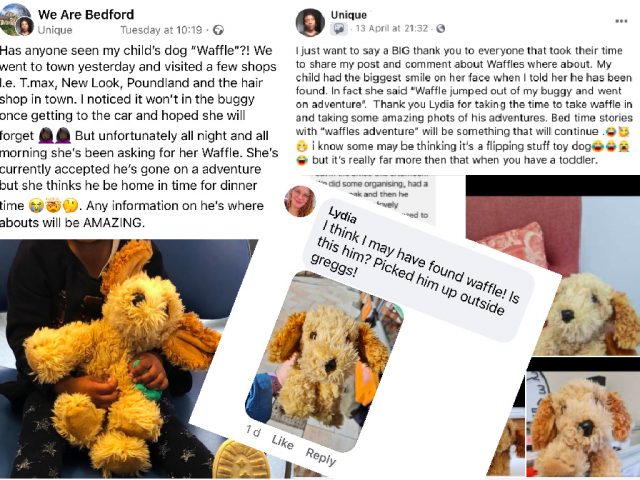 A toy dog, lost in Bedford town centre, has been reunited with its owner, thanks to a local Facebook group.

Chanique took to the We Are Bedford Facebook group to ask if any of its 29,700 members had seen her daughter’s toy dog, Waffle, which had been lost somewhere in the middle of town.

Trying to prepare her daughter for the worst, Chanique had told her that Waffle had “gone on an adventure” and hopefully he’d return soon.

Within minutes of putting her faith in the We Are Bedford community, member Lydia Kelly commented to say that she’d found Waffle outside Greggs, he was safe and sound, and waiting patiently to be reunited with his young owner.

Lydia even sent photos of Waffle to Chanique to back up the story he’d been off on an adventure.

Chanique was able to tell her daughter the good news at bedtime, telling her that Waffle was helping Lydia out at her office at the Bedford Counselling Foundation on Tavistock Street until they could meet up the following day.

The next morning, Waffle’s owner prepared a thank you gift for Lydia…

“I thought someone had probably dropped him and as Greggs was closing I thought it best to take him with me rather than leave him there.”

When Lydia got home she searched the We are Bedford group on Facebook to see if anyone was looking for him.

“I was just about to write a post when I saw Chanique’s plea for information.”

Lydia got in touch with Chanique and let her know that she and Waffle had spent “an enjoyable afternoon together at The Counselling Foundation and he’s welcome to come back for a visit any time!”

Waffle and his owner were reunited yesterday and, Chanique said: “Waffle is back in his happy place and looking forward to going on some more adventures.”