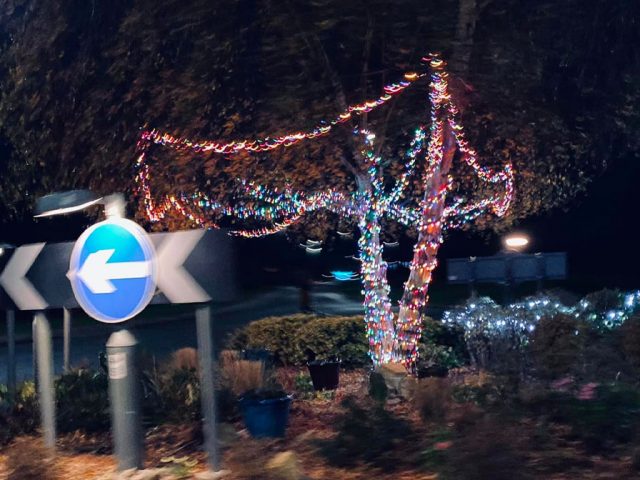 Volunteers in Abbeyfields have been praised for bringing festive cheer to their neighbourhood.

The Abbeyfields Roundabouts Group organised a community switch-on of their Christmas lights and a Santa’s Grotto for local children.

The group was initially set up three years ago to organise planting and weeding of the five roundabouts in the area and their work earned them a nomination in the CPRE awards this year.

“We are a bunch of community volunteers and are approved by Bedford Borough Council,” explained group coordinator, Helen Bennett.

“We put battery powered fairy lights on the roundabouts each Christmas and have a Community Switch On and provide a Santa’s Grotto for the local children. The local shop provides sweets and drinks and the children all come to see Santa.”

This year, Elstow Parish Council funded plug-in mains power boxes on each roundabout, and the group asked residents to donate any lights they could spare.

As well as lights, the group has been the beneficiary of some other decorations, thanks to a lucky trip to the tidy tip.

“A man was at the tidy tip a few weeks ago to throw away metal Christmas figures his family had been using for 30 years,” said Helen.

“He was sad as he didn’t want to throw them, but his children had left home. He kindly donated them to us and I told him to come and visit them in their new home on a roundabout at Christmas.

“They are in pride of place and look lovely. It’s wonderful to join together as a community to give a little happiness.”

One resident said, “The group do some truly fantastic work in creating, maintaining and improving not just the roundabouts on Abbeyfields, but also the green area that runs alongside Abbeyfields.

“I live in Abbeyfields and along with other residents and those that visit get the benefit of their work.”