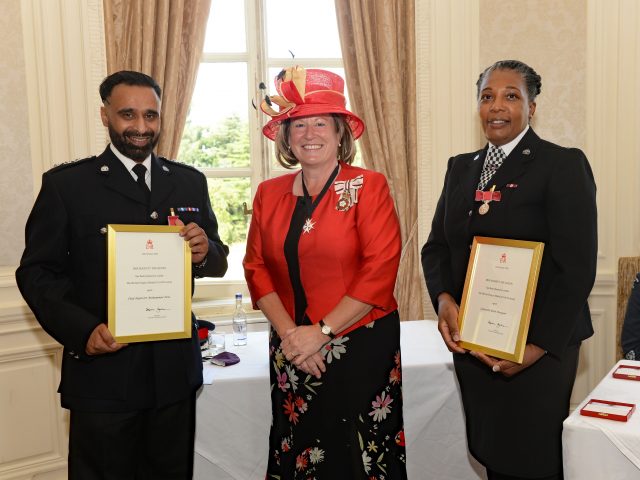 Two Bedfordshire police officers have received honours from the Queen for transforming the force into one of the most representative in the country through a record-breaking recruitment drive.

Chief Inspector Mo Aziz and PC Ruth Honegan led a recruitment campaign, which was praised by the National Black Police Association for its diversity.  Half of the country’s 43 Police forces have since approached Bedfordshire Police to learn from their example.

The pair were presented with British Empire Medals by Her Majesty’s Lord-Lieutenant of Bedfordshire, Helen Nellis, at a special ceremony at Luton Hoo on Monday 19 July.

Deputy Chief Constable Trevor Rodenhurst, who attended the event, said: “It was an honour to see Ruth and Mo awarded their British Empire Medals.

“Their efforts to help transform the force into one of the most representative police forces in the country is a great achievement and one they should be proud of.”

He said it was important “people from all backgrounds” can look at Bedfordshire Police “and feel we are representative of their communities,” and that those who join the force “are supported to thrive and progress so that they can help to deliver an outstanding service to all our communities.”

In the campaign’s first year, 30 per cent of new officers came from ethnic minority backgrounds.  The following year, this rose to a quarter of all recruits.

Over two years the proportion of Bedfordshire Police officers from ethnic minority backgrounds has nearly doubled from 5.7 per cent to 10.4 per cent.

After the ceremony, Her Majesty’s Lord-Lieutenant of Bedfordshire, Helen Nellis said: “It was an absolute pleasure to meet some wonderful Bedfordshire people and present them with their British Empire Medals on behalf of HM The Queen.

“Their stories were so inspiring and demonstrated how, as a county, when ordinary people pull together and look out for their neighbours, they can make a real difference to the lives of others.”

Recipients were joined by family members to hear details of their achievements, read out by the Lord-Lieutenant’s Cadets.