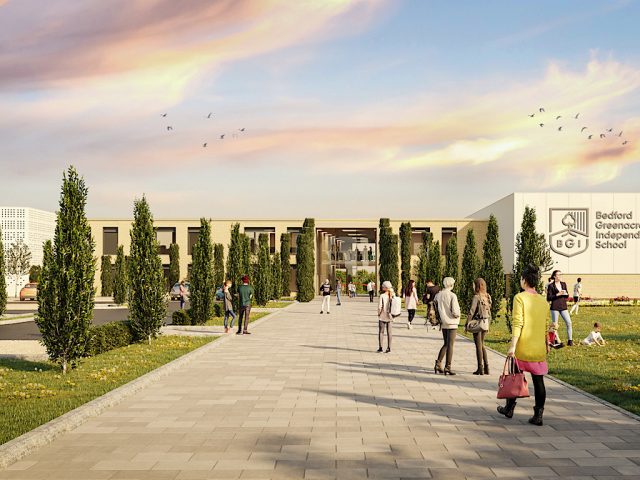 The dawn of a new era has arrived for both Rushmoor and St Andrew’s Schools.

Collectively they have educated children in Bedford for over 230 years and now, looking towards an even brighter future, they will be formally known as Bedford Greenacre Independent School, effective 1 May 2021.

The schools formed an Alliance in 2013, led by Ian Daniel, Principal, with staff teaching across two sites, supported by one Governing Body, working towards the goal of merging as one school.

The plan is to relocate both sites to one; a new, purpose-built, state-of-the-art facility located on 38 acres of land purchased several years ago in a semi-rural setting in Bedford.

Obstacles have beset the path to the new site, not least the global pandemic, but the finish line is getting closer and Bedford Greenacre Independent School plans to be in their new location in 2022.

The merger and new name were originally timed to coincide with the proposed move to the new site, but a decision was taken to merge now, prior to the move, and build on the new identity going forward.

Commenting on the new name, Mr Daniel explained: “Using Bedford is geographical, but it also underlines that Rushmoor and St Andrew’s have long histories in the town and we are building on their many successes.

“Greenacre comes from its link to the land on which we are building our new school as a family named Greenacre once owned the land, so we chose this as a geographical and historical reference.”

History and aims for the future are expressed in the logo; a tree to signify growth, its roots conveying both schools strong past. The tree also reflects “Greenacre’s” rural setting. The vertical lines signify stability, longevity and strength for the future.

Mr Daniel said: “It is a great opportunity to design our new building with input from our pupils, their families and teaching staff to ensure the planned new facilities work best for our current and future pupils.

“We are also establishing links with the wider community, such as local sports clubs, who will be able to enjoy the new facilities outside of school hours; this is an important part of our planning to support our local area.”

Bedford Greenacre Independent School caters for children through the entire age range, from Reception to Sixth Form, with a separate nursery setting, offering consistency in education and pastoral support.

The School is truly independent and plans to remain relatively small with a maximum number of 680 pupils, not far off their current combined numbers.

The class sizes will remain small to optimise the teaching and learning experience. A version of the ‘diamond structure’ is envisaged, where secondary age pupils will receive separate lessons for girls and boys in certain subjects, whilst also enjoying the benefits of a co-educational setting. The best of both worlds.

Bedford Greenacre Independent School Limited Nursery setting will remain at its current location on Kimbolton Road, with plans to expand the provision into the vacated premises of the junior classes.

Mr Daniel commented, “The past year has been incredibly difficult for schools through the pandemic, everyone had to quickly adapt.

“Our pupils have remained enthusiastic about their learning throughout this strange period and have made good progress despite remote learning.

“Now they are back on site we are focusing on wellbeing and learning opportunities to ensure they continue to make good progress.

“The fact that we are announcing the new school name now, and releasing details of the proposed new site shortly, means that we can all look forward to exciting times ahead”.

Bedford Greenacre Independent School will share “a pupil’s journey” through the planned new school site, using CGI, on the 8 May 2021 at its Open Morning, which will be by appointment, respecting current Covid-19 rulings.